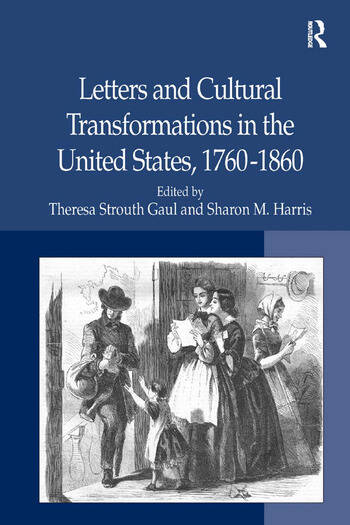 Letters and Cultural Transformations in the United States, 1760-1860

This volume illustrates the significance of epistolarity as a literary phenomenon intricately interwoven with eighteenth- and nineteenth-century cultural developments. Rejecting the common categorization of letters as primarily private documents, this collection of essays demonstrates the genre's persistent public engagements with changing cultural dynamics of the revolutionary, early republican, and antebellum eras. Sections of the collection treat letters' implication in transatlanticism, authorship, and reform movements as well as the politics and practices of editing letters. The wide range of authors considered include Mercy Otis Warren, Charles Brockden Brown, members of the Emerson and Peabody families, Margaret Fuller, Elizabeth Stoddard, Catherine Brown, John Brown, and Harriet Jacobs. The volume is particularly relevant for researchers in U.S. literature and history, as well as women's writing and periodical studies. This dynamic collection offers scholars an exemplary template of new approaches for exploring an understudied yet critically important literary genre.

'The astute attention paid by the essays in this volume to the matters of cultural engagement in the early American republic make this volume a stimulating feast. Revealing the United States through a global correspondence about its emerging identity, the collection pays critical attention to the private writings of prominent authors, showing how letters not only transform the private sphere but also reorient culture as they express identities in search of a location.' Shirley Samuels, Cornell University, USA 'Letters and Cultural Transformations in the United States, 1760-1860 is a major contribution to our ever-expanding sense of American literary and cultural history. Its masterful introduction and essays frame an early American moment in which letter writing, both as an intimate and a public act, was central to defining a range of American identities. By pulling together a variety of materials and approaches, Gaul and Harris definitively establish that epistolarity is not only a field in and of itself, but that this is a field whose moment has come.' Hilary E. Wyss, Auburn University, USA '... full of immediately teachable information about various women writers of the era, but above all it should inspire ongoing innovation in research in the field of women’s writing as the field continues to stretch beyond a narrow concern with canonical authors and texts. Essay after essay, the collection abounds in insights, placing epistolarity in thematic relationship to transnationalism, to authorship, and to periodical publication.' Legacy: A Journal of American Women Writers 'According to Letters and Cultural Transformations, letters are not historical documents only, something to mine for information or ethnographic or biological detail.� Instead, they are situated documents, texts growing out of a complex of cultural and technological practices as well as the mind and experience of a writer� (236). Hopefully, this thoughtful consideration of the letter

Letters and Cultural Transformations in the United States, 1760-1860