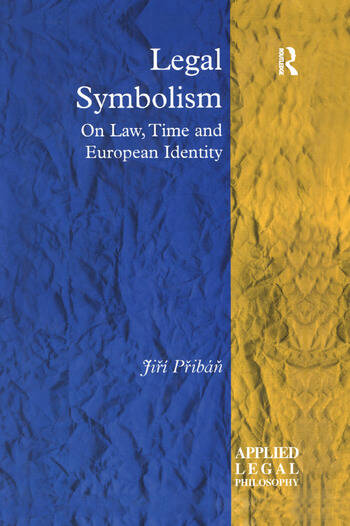 JirÃ­ PribÃ¡n's book contributes to the field of systems theory of law in the context of European legal and political integration and constitution-making. It puts recent European legislative efforts and policies, especially the EU enlargement process, in the context of legal theory and philosophy. Furthermore, the author shows that the system of positive law has a symbolic meaning, reflecting how it also contributes to the semantics of political identity, democratic power and moral values, as well as the complex relations between law, politics and morality.

Contents: Series editor's preface; Introduction; Part I Theory of Symbolic Communication in Law: A Social Systems Perspective: Constitution-making and the symbolic rationality of law: a systemic differentiation of law, politics and morality; The symbolic evolution of political identity from the spirit of the laws; Law and the symbolization of time: the limits of dealing with the past and the future. Part II Identity and Law: European Reflections on Demos and Ethnos: Civil and ethnic traditions and identities: post-communist constitution-making in Central Europe; Identity, constitution-making and the enlargement of the European Union; The symbolic power of European law and search of European politics. Part III The Temporality of Justice: Between Retrospective Laws and Prospective Politics: The retrospectivity of laws and the temporality of justice in post-communist Central Europe; Moral paradoxes of legal justice: an analysis of restitutive and administrative dealing with the past; On legal symbolism and social theory: concluding remarks; Bibliography; Index.

JirÃ­ PribÃ¡n is Professor of Law at Cardiff University Law School, UK. He has published extensively in the areas of sociology of law, legal philosophy, constitutional and European comparative law, and theory of human rights.

'Jiri Priban brilliantly challenges us to rethink our conventional ideas about the relationship between morality, culture and law - in particular, constitutional law. In this erudite and compelling book, he takes up the thorniest problems of today’s Europe, including the enlargement of the European Union and post-communist constitution-making in Central Europe, and analyses them against the theory of symbolic communication through law. A bold, ambitious, relentlessly intelligent work.' Wojciech Sadurski, Professor in the Department of Law; European University Institute in Florence. 'JirÃ­ PribÃ¡n's rich and sophisticated discussion thoughtfully explores law's complex interactions with morality and politics, and the crucial significance of constitutions in linking legal, moral and political systems. Not least, he highlights major implications for European politics today of the legal and constitutional realities he identifies.' Roger Cotterrell, Anniversary Professor of Legal Theory Queen Mary, University of London 'PribÃ¡n manages to put together a timely exposition of the connection between law, politics and morality, both abstractly and in the context of post-communist Central Europe, through a convincing reworking of his previous theses and and expansion in the direction of a firmer understanding of temporality.' International Journal for the Semiotics of Law