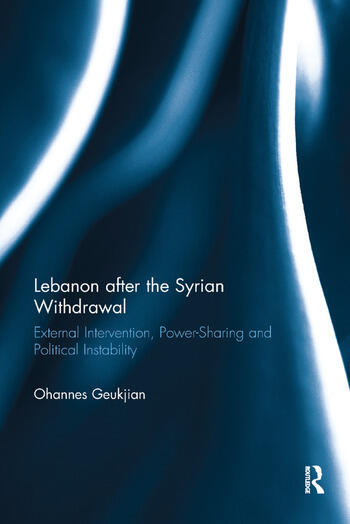 Lebanon experienced serious instability and ethno-national conflict following the Syrian withdrawal in 2005, compounded by the Arab Spring, which led to regional instability and civil war in Iraq and Syria. Why did consociational democracy fail? Was failure inevitable? What impact could external powers play in creating an environment where consociationalism might be successfully implemented?

This book addresses these key questions and provides a comprehensive analysis of how internal and external elite relations influence the chances of a successful regulation of ethno-national conflict through power-sharing. Exploring the roles played by Syria, Qatar, Iran, Saudi Arabia, the United States and France, it argues that external actors in the Lebanese conflict largely determined whether power-sharing was successfully established and shows that the consociational democratic model cannot provide long-term conflict regulation in their absence. The author argues that relationships between internal and external actors determine the prospects for successful conflict regulation and pinpoints the crucial role of the external forces in the creation of power-sharing agreements in Lebanon concluding that future success is dependent on the maintenance of positive, exogenous pressures.

This book will be of key interest to students and scholars studying politics, international relations, and Middle East studies.

4. External Intervention and the Syrian Withdrawal in 2005

6. Political and Military Escalation and the Doha Agreement, 2007-08

8. The Limits of Lebanon’s Consociationalism to Manage Internal Conflict, 2011-12

Ohannes Geukjian is Assistant Professor in Comparative Politics and Conflict Resolution in the Political Science and Public Administration Department at the American University of Beirut, Lebanon.