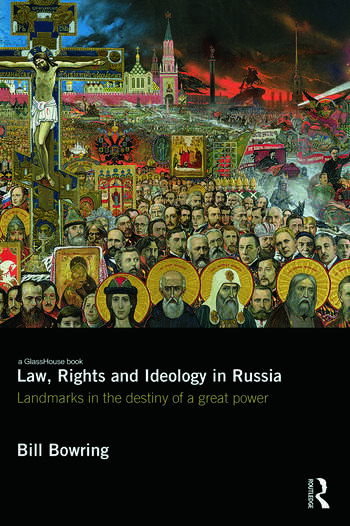 Law, Rights and Ideology in Russia: Landmarks in the Destiny of a Great Power

This book provides a rich examination of Russia’s particular attitude to political liberalism, the rule of law, and rights. In words often cited in contemporary Russia, the former Bolshevik and religious philosopher Nikolai Berdyaev wrote, in 1911, that ‘Russia is the Third Rome’. This book examines the legacy of this messianic self-narrative, stressing its importance for any adequate understanding of contemporary Russian attitudes to the rule of law.

The book starts with the surprising role of the Scottish Enlightenment in the origins of law as an academic discipline in Russia in the eighteenth century. The Great Reforms of Tsar Aleksandr II, abolishing serfdom in 1861 and introducing jury trial in 1864, are then examined and debated as genuine reforms or the response to a revolutionary situation. A new interpretation of the life and work of the Soviet legal theorist Yevgeniy Pashukanis leads to an analysis of the conflicted attitude of the USSR to international law and human rights, especially the right of peoples to self-determination. The complex history of autonomy in Tsarist and Soviet Russia is considered, alongside the collapse of the USSR in 1991. An examination of Russia’s plunge into the European human rights system under Yeltsin is followed by the history of the death penalty in Russia. Finally, the secrets of the ideology of ‘sovereignty’ in the Putin era and their impact on law and rights are revealed. Throughout, the constant theme is the centuries long hegemonic struggle between Westernisers and Slavophiles, against the backdrop of the Messianism that proclaimed Russia to be the Third Rome, was revived in the mission of Soviet Russia to change the world and which has echoes in contemporary Eurasianism and the ideology of sovereignty.

Introduction  1.Theorising Russia's ideological history  2. The Scottish Enlightenment in the Russian Empire  3. The 1850s and 1860s in Russia: revolutionary situation or great reforms?  4. The trajectory of Yevgeniy Pashukanis and the struggle for power in Soviet law  5. Soviet international law and self-determination  6. The collapse of the USSR and the 'parade of sovereignities'  7. Russian autonomy  8. Human Rights in the Yeltsin period  9. Russia and the death penalty  10. Sovereign democracy  Conclusion

Bill Bowring is Professor of Law at Birkbeck College, University of London, where he teaches human rights, public international law and minority rights. He is also a practising barrister specialising in human rights, since 2000 representing applicants against Russia and other post-Soviet states at the European Court of Human Rights. He has taught at a number of Russian universities and has worked as a consultant with DFID, the EU, Council of Europe, and the OSCE’s High Commissioner on National Minorities.

'Bill Bowring brings to his new book insights gained from a close study of Russian sources usually ignored by Western scholars, as well as a professional lifetime's fascination with Russian legal and political theory. His contextual discussions bring a new level of understanding of the importance of the landmarks on which he focuses. This book will be invaluable to anyone with an interest in Russia, her history, legal system and political development. The style is clear and accessible, making the book enjoyable to read as well is hugely informative. Very highly recommended.' - Jane Henderson, King's College London; author of "The Constitution of the Russian Federation: A Contextual Analysis" (Hart 2011)

‘[Professor Bowring] has an expert knowledge of the situation regarding law and human rights there, and this book is an invaluable source of information on historic and current Russian law’ - Jean Turner for Society for Co-operation in Russian and Soviet Studies (2013)

'Summarizing on the book by Professor Bowring, I would like to note its novelty and originality. The author presented a historical and comparative legal analysis of such three important issues as ideology, law and human rights. In addition, the value of the book is in numerous tables with updated statistics on such issues as sovereignty, ethnic populations, death penalty executions and types of crimes for which death penalty was appointed in Russia. All the above materials present a special value for the academia and political and law experts interested in Russia.' - A. Saidov for Democratization and Human Rights 2(62)-2014

'Throughout Landmarks, Bowring usefully brings to light Russian debates on a range of topical issues in legal and political journals, edited collections and conferences, which have not been previously highlighted or translated in to the English language.' - Victor Kattan, National University of Singapore, for Social & Legal Studies (2014)

"But perhaps one of the greatest contributions that Bowring makes is giving anti-Russians a useful insight into how to contextualize their arguments when making claims about Rossiyskaya Federatiysa, because westerners generally make a lot of claims about Russia without properly understanding the enigma that spans the Eurasian landmass with its varied “peoples”, ideas and legal pluralism. Bowring should be commended for transferring some of that knowledge into an accessible format in what is largely a gripping discourse on a strange people often fraught with rebellions." - P Sean Morris for Marx & Philosophy (2015)

Law, Rights and Ideology in Russia: Landmarks in the Destiny of a Great Power