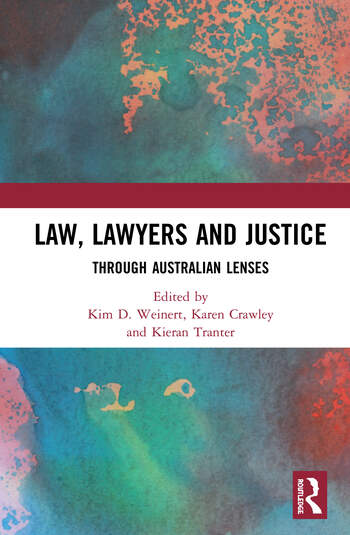 This book engages with the place of law and legality within Australia’s distinctive contribution to global televisual culture.

Australian popular culture has created a lasting legacy – for good or bad – of representations of law, lawyers and justice ‘down-under.’ Within films and television of striking landscapes-peopled with heroes, antiheroes, survivors and jokers, there is a fixation on law, conflicts between legal orders, of brutal violence and survival. Deeply compromised by the ongoing violence against the lives and laws of First Nation Australians, Australian film and television has sharply illuminated what it means to live with a ‘rule of law’ that rules with a legacy, and a reality, of deep injustice. This book is the first to bring together scholars to reflect on, and critically engage with, the representations and global implications of law, lawyers and justice captured through the lenses of Australian film, television and social media.

Exploring how distinctively Australian lenses captures uniquely Australian images and narratives, the book nevertheless engages these in order to provide broader insights into the contemporary translations and transmogrifications of law and justice.

The unsettled law and justice of Australia

Whose country? Colonialism and the rule of law in Sweet Country and Charlie’s Country

Taking a lens to the chase in Australian settler state colonialism

Picnic at Hanging Rock: Coming of age as a girl in the Gothic colonial institution

Rake and Rumpole – mavericks for justice:

Purity and impurity in legal professionalism

Romper Stomper: A critique of neoliberalism in Australia

Justice at the end of Fury Road

Kieran Tranter is at School of Law, Queensland University of Technology