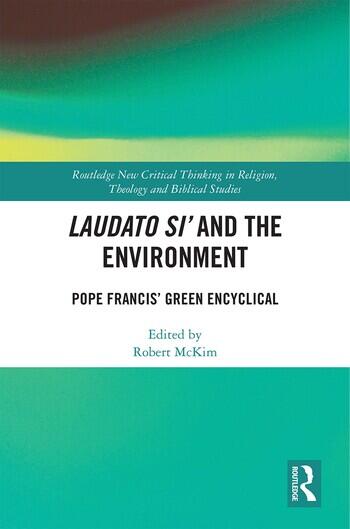 This volume is a response to Pope Francis’ environmental encyclical Laudato Si’. Published in 2015, the encyclical urges us to face up to the crisis of climate change and to take better care of the Earth, our common home, while also attending to the plight of the poor.

In this book the Pope’s invitation to all people to begin a new dialogue about these matters is considered from a variety of perspectives by an international and multidisciplinary team of leading scholars. There is discussion of the implications of Laudato Si’ for immigration, population control, eating animals, and property ownership. Additionally, indigenous religious perspectives, development and environmental protection, and the implementation of the ideas of the encyclical within the Church are explored. Some chapters deal with scriptural or philosophical aspects of the encyclical. Others focus on central concepts, such as interconnectedness, the role of practice, and what Pope Francis calls the "technocratic paradigm."

This book expertly illuminates the relationship between Laudato Si’ and environmental concerns. It will be of deep interest to anyone studying religion and the environment, environmental ethics, Catholic theology, or environmental thought.

1 The Challenge and the Opportunity: Some Perspectives on Laudato Si’

6 Rethinking our Treatment of Animals in Light of Laudato Si’

7  ‘We were nowhere. We’ve got somewhere.’ Does Laudato Si’ go far enough, and is the Church on board for the climate journey?

9 Sources of Authority in Laudato Si’

10 A Constructivist Engagement with Laudato Si’

11 A New Anthropology? Laudato Si' and the Question of Interconnectedness

12 ‘Realities are More Important than Ideas’: The Significance of Practice in Laudato Si’

13 Opposing the ‘technocratic paradigm’ and ‘appreciating the small things’