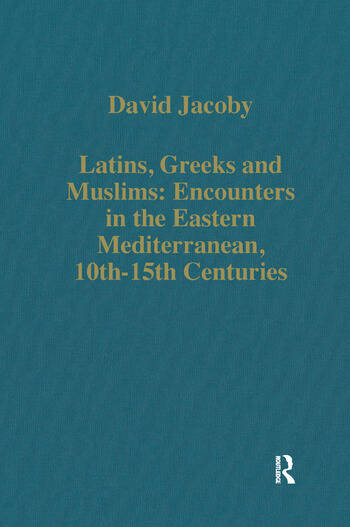 Trade, shipping, military conquest, migration and settlement in the eastern Mediterranean of the 10th-15th centuries generated multiple encounters between states, social and 'national' groups, and individuals belonging to Latin Christianity, Byzantium and the Islamic world. The nature of these encounters varied widely, depending on whether they were the result of cooperation, rivalry or clashes between states, the outcome of Latin conquest, which altered the social and legal status of indigenous subjects, or the result of economic activity. They had wide-ranging social and economic repercussions, and shaped both individual and collective perceptions and attitudes. These often differed, depending upon 'nationality', standing within the dominant or subject social strata, or purely economic considerations. In any event, at the individual level common economic interests transcended collective 'national' and cultural boundaries, except in times of crisis. The studies in this latest collection by David Jacoby explore the multiple facets of these eastern Mediterranean encounters and their impact upon individual economic activities, with special attention to the 'other', outsiders in foreign environments, foreign privileged versus indigenous traders, the link between governmental intervention, 'naturalization', and fiscal status, as well as the interaction between markets and peasants.

David Jacoby is an Emeritus Professor at The Hebrew University of Jerusalem, Israel.

'The scholarship is outstanding, and whilst the specific nature of the collection will not be of interest to all, the work provides a valuable survey of trade and cultural encounters in the Mediterranean during this period.' Islam and Christian-Muslim Relations