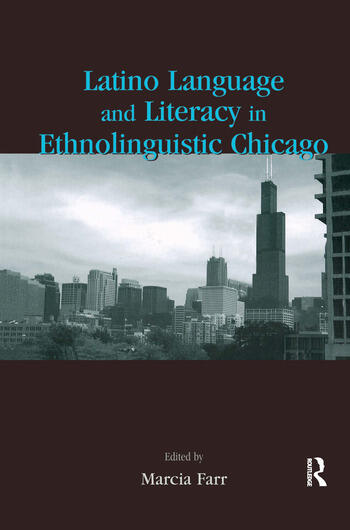 This volume--along with its companion Ethnolinguistic Chicago: Language and Literacy in the City's Neighborhoods--fills an important gap in research on Chicago and, more generally, on language use in globalized metropolitan areas. Often cited as a quintessential American city, Chicago is, and always has been, a city of immigrants. It is one of the most linguistically diverse cities in the United States and home to one of the largest and most diverse Latino communities. Although language is unquestionably central to social identity, and Chicago has been well studied by scholars interested in ethnicity, until now no one has focused--as do the contributors to these volumes--on the related issues of language and ethnicity.
Latino Language and Literacy in Ethnolinguistic Chicago includes:
*ethnographic studies based in home settings that focus on ways of speaking and literacy practices;
*studies that explore oral language use and literacy practices in school contexts; and
*studies based in community spaces in various neighborhoods.

It offers a rich set of portraits emphasizing language use as centrally related to ethnic, class, or gender identities. As such, it is relevant for anthropologists, sociologists, linguists, historians, educators and educational researchers, and others whose concerns require an understanding of "ground-level" phenomena relevant to contemporary social issues, and as a text for courses in these areas.

"Data is presented and analyzed clearly in each chapter, to such a degree that even those who are not versed in the fields of  literacy studies, sociolinguistics, etc., can follow the argument and assess the findings. The clarity of the writing makes this book applicable for libraries whose clients include educators, including ESL teachers, school administrators, and social scientists. Recommended."

"Very timely and interesting.....Latino Language and Literacy in Ethnolinguistic Chicago is an excellent contribution to the published research literature on language socialization and language and literacy development and practices in the largest of U.S. language-minority groups....Unique in its focus on diverse language and literacy practices in a single city, it provides a model for the kind of in-depth research we need on Latino and other language minority communities...a guide to the richness of the field and to the kind of work that might be done in other cities."
—Robert Bayley
University of Texas at San Antonio