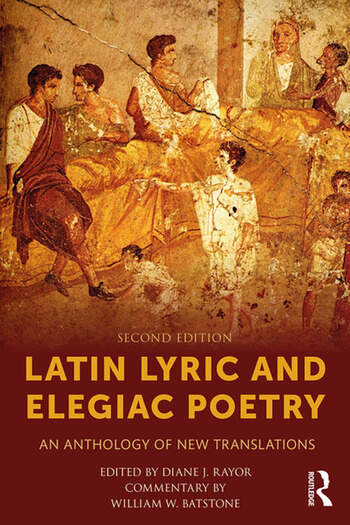 Latin Lyric and Elegiac Poetry: An Anthology of New Translations

Latin Lyric and Elegiac Poetry, first published almost 25 years ago, offered students accurate and poetic translations of poems from the sudden flowering of lyric and elegy in Rome at the end of the Republic and in the first decades of the Augustan principate. Now updated in this second edition, the volume has been re-edited with both revised and new translations and an updated commentary and bibliography for readers in a new century, ensuring that this much-valued anthology remains useful and relevant to a new generation of students studying ancient literature and western civilization. The volume features an expanded selection of newly translated poetry including:

The second edition reflects changing interests and modes of reading while remaining true to the power of the poetry that has influenced the literature of many cultures. The combination of accurate and vibrant translations with thorough commentary makes this an invaluable anthology for those interested in poetry, world literature, Roman civilization, and the history of ideas and sexuality, allowing readers to compare different poets' responses to politics, love and sex, literary innovation, self, and society.

Prefaces to the Second Edition

Diane J. Rayor is Professor of Classics at Grand Valley State University, USA, in the department that she co-founded in 2000. She has published six book translations of ancient Greek poetry and drama: Sappho: A New Translation of the Complete Works (2014), the first book to include recent Sappho discoveries; Euripides’ “Medea” (2013); Sophocles’ “Antigone” (2011); Homeric Hymns; Sappho’s Lyre: Archaic Lyric and Women Poets of Ancient Greece; and Callimachus (with S. Lombardo). Helen and Hecuba are joining the line-up after her stint as a Roe Green Visiting Theater Artist for 2018–19 at the University of Colorado, USA, for the production of Hecuba.

is Professor of Classics at The Ohio State University, USA. He has published widely on the authors of the Republic and Triumviral period, including Plautus, Catullus, Caesar, Cicero, Sallust, and Vergil. He is the co-author of Caesar’s Civil Wars (with Cynthia Damon), has translated (with introduction and commentary) Sallust’s Catiline’s Conspiracy, The Jugurthine War, and Histories, and edited or co-edited several volumes including Defining Genre and Gender in Latin Literature (with Garth Tissol). He is currently working on the Oxford Readings in Sallust (with Andrew Feldherr) and his article on Sulpicia, “Sulpicia and the Speech of Men,” a complement to and extension of the notes here, has recently been published.

Latin Lyric and Elegiac Poetry: An Anthology of New Translations