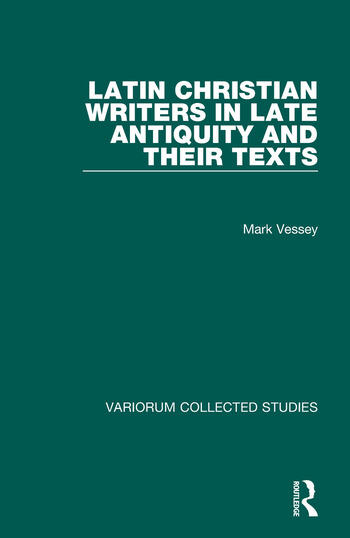 Latin Christian Writers in Late Antiquity and their Texts

By close engagement with both traditional and contemporary approaches to ancient Christian literature, Latin Christian Writers in Late Antiquity and their Texts seeks to delineate a historiographical problem, at the same time rendering patristics as part of the subject-matter of a new literary history. After preliminary essays marking out the field, the volume is organized in three sections by authors, forms of discourse, and disciplines. Released from the theological discipline of patristics, the writings of the church fathers have in recent decades become the common property of students of early Christianity, late antiquity and the classical tradition. In principle, they are now no more (nor less) than sources, documents and literary texts like others from their period and milieux. Yet when replaced in the longer history of Western textual and literary practices, the collective literary oeuvre of Latin clerics, monks and ascetic freelances of the Later Roman Empire may still seem to occupy a place of decisive, if not canonical importance. How does one now account for the abiding formativeness of Latin Christian writing of the fourth and fifth centuries CE? What demands does such writing lay on a modern history of literature? These are the questions asked here, in view of a new literary history of patristic texts.

Contents: Preface. Preliminary: A New Order of Books: The Epistula Rustici ad Eucherium: from the library of imperial classics to the library of the fathers. Literary Histories: Patristics and literary history: reflections on the programme of a new history of late antique Latin literature; Literacy and litteratura, A.D. 200-800. Jerome, Augustine and Readers: Jerome's Origen: the making of a Christian literary persona; Conference and confession: literary pragmatics in Augustine's 'Apologia contra Hieronymum'; The Augustinian reader; Opus imperfectum: Augustine and his readers, 426-435 A.D. Later Latin Textualities: Orthodoxy, 'Literature', Law: The forging of orthodoxy in Latin Christian literature: a case study; Peregrinus against the heretics: classicism, provinciality, and the place of the alien writer in late Roman Gaul; The origins of the Collectio Sirmondiana: a new look at the evidence. Scribes and Scholars: Between Patristics and Late Antiquity: The demise of the Christian writer and the remaking of 'late antiquity': from H.-I. Marrou's Saint Augustine (1938) to Peter Brown's Holy Man (1983); Erasmus' Jerome: the publishing of a Christian author; After the Maurists: the Oxford correspondence of Dom Germain Morin, OSB. Addenda and corrigenda; Index.

Mark Vessey is Associate Professor and has the Canada Research Chair in Literature/Christianity and Culture in the Department of English at University of British Columbia, Canada.

Latin Christian Writers in Late Antiquity and their Texts