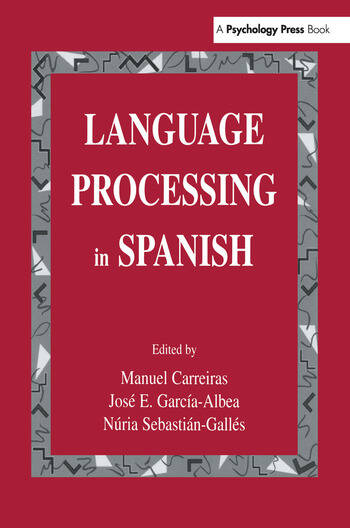 Spanish, the third most widely-used language in the world, differs from English in a number of important respects. Since English has been predominant in psycholinguistic research, contrasting properties of Spanish may help to test the generality of language processing mechanisms and to refine their description. The set of contrasting features considered in this book includes acoustical and syllabic transparency, shallow orthography, a much richer morphology, flexibility in word order, less variability in intonational contours, and the existence of null pronominal subjects for inflected verbs. There are also interesting contrasts in the frequency of different linguistic units, whose impact on language processing is also evaluated. One of the main lines of argument throughout this book deals with the tension between universality and variation as a way of characterizing the functioning of language capacities and processes.

The variety of topics covered by this book ranges from one end of the spectrum of language related behavior to the other: speech perception, lexical access in word recognition, relations between phonological and orthographic representations, sentence processing, discourse comprehension, and language production. All chapters focus on questions of general interest within each topic, and in most cases they appeal to one particular feature of the Spanish language that is relevant for a given question. Most chapters show the indisputable importance of crosslinguistic research in psycholinguistics to improve understanding on whether universal cognitive mechanisms and language specific routines underlie the ability of understanding and producing language.

"This book is a first attempt to bring together a collection of state-of-the-art studies of various lines of research on language processing in Spanish, ranging from speech perception to sentence production."
—Studies in Second Language Acquisition