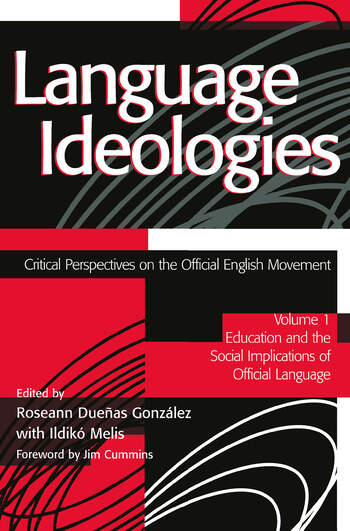 Language Ideologies: Critical Perspectives on the Official English Movement, Volume I: Education and the Social Implications of Official Language

How do educators balance the rights of the rapidly growing percentage of the United States' population whose first language is not English or whose English differs from standard usage with the rights of the majority of students whose first and generally only language is English? This two-volume set addresses the complicated and divisive issues at the heart of the debate over language diversity and the English Only movement in the U.S. public education. Blending social, political, and legal analyses of the ideologies of language with perspectives on the impact of the English Only movement on education and on classrooms at all levels, Language Ideologies: Critical Perspectives on the Official English Movement offers a wide range of perspectives that teachers and literacy advocates can use to inform practice as well as policy. This exhaustive, two-volume collection not only updates existing information on the English Only movement in the United States, but also includes the international context, looking at the emergence of English as a world language through a postcolonial lens. The complexity of the debate is also reflected in the exceptionally diverse list of contributors, who speak from varying disciplines and backgrounds including sociology, linguistics, university administration, the ACLU, law, ESL, and English. Both volumes explore the political, legislative, and social implications of language ideologies.

Volume 1: Education and the Social Implications of Official Language focuses in particular on the consequences for the classroom. In Volume 2: History, Theory, and Policy, the focus is on the implications for policymakers and language-program administrators.

"Language Ideologies is a two-volume anthology...'designed for educators, administrators, ESL experts, scholars, and all those who are concerned about language as a source and product of discrimination in our schools and society'....many of the essays are of excellent quality....I am very glad we have this publication...every instructor of teachers of any kind of English should have a set on their shelf."
—Cambridge University Press

"The English Only movement can best be understood and challenged as being deeply antithetical to the values and relations of a democratic society. The attack on bilingual education can best be grasped in its complexity when it is engaged as part of the ongoing struggle against public education and broader efforts by various social movements to extend democracy into all spheres of society....Democracy celebrates rather than closes down the multiple selves and cultures that constitute the public spheres and construct the meaning of citizenship and democracy in a global context."
—Henry A. Giroux
Pennsylvania State University

Language Ideologies: Critical Perspectives on the Official English Movement, Volume I: Education and the Social Implications of Official Language