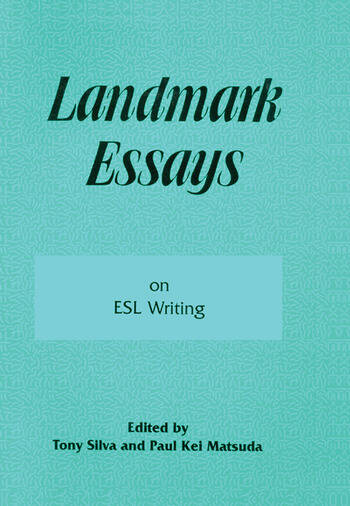 In recent years, the number of nonnative speakers of English in colleges and universities in North America has increased dramatically. As a result, more and more writing teachers have found themselves working with these English as a Second Language (ESL) students in writing classes that are designed primarily with monolingual, native-English-speaking students in mind. Since the majority of institutions require these students to enroll in writing courses at all levels, it is becoming increasingly important for all writing teachers to be aware of the presence and special linguistic and cultural needs of ESL writers. This increase in the ESL population has, over the last 40 years, been paralleled by a similar growth in research on ESL writing and writing instruction--research that writing teachers need to be familiar with in order to work effectively with ESL writers in writing classrooms of all levels and types. Until recently, however, this body of knowledge has not been very accessible to writing teachers and researchers who do not specialize in second language research and instruction.

This volume is an attempt to remedy this problem by providing a sense of how ESL writing scholarship has evolved over the last four decades. It brings together 15 articles that address various issues in second language writing in general and ESL writing in particular. In selecting articles for inclusion, the editors tried to take a principled approach. The articles included in this volume have been chosen from a large database of publications in second language writing. The editors looked for works that mirrored the state of the art when they were published and made a conscious effort to represent a wide variety of perspectives, contributions, and issues in the field. To provide a sense of the evolution of the field, this collection is arranged in chronological order.

Contents: P.K. Matsuda, T. Silva, Introduction. Essays. A. Pincas, Structural Linguistics and Systematic Composition Teaching to Students of English as a Foreign Language (1962). R.B. Kaplan, Cultural Thought Patterns in Inter-Cultural Education (1966). V. Zamel, Teaching Composition in the ESL Classroom: What We Can Learn From Research in the Teaching of English (1976). A. Raimes, What Unskilled ESL Students Do as They Write: A Classroom Study of Composing (1985). J. Hinds, Reader-Writer Responsibility: A New Typology (1987). U. Connor, Research Frontiers in Writing Analysis (1988). R. Spack, Initiating ESL Students Into the Academic Discourse Community: How Far Should We Go (1988)? D. Horowitz, Fiction and Nonfiction in the ESL/EFL Classroom: Does the Difference Make a Difference (1990)? A.M. Johns, Interpreting an English Competency Examination: The Frustrations of an ESL Science Student (1991). J.G. Carson, Becoming Biliterate: First Language Influences (1992). T. Santos, Ideology in Composition: L1 and ESL (1992). I. Leki, Reciprocal Themes in ESL Reading and Writing (1993). T. Silva, Toward an Understanding of the Distinct Nature of L2 Writing: The ESL Research and Its Implications (1993). J. Reid, Responding to ESL Students' Texts: The Myth of Appropriation (1994). L. Hamp-Lyons, B. Kroll, Issues in ESL Writing Assessment: An Overview (1996). P.K. Matsuda, Contrastive Rhetoric in Context: A Dynamic Model of L2 Writing (1997).

"Analysts of rhetoric or of education, particularly those unfamiliar with this field of study, will find it useful to have these articles collected together as a reference to consult or as a textbook for a graduate seminar....Hundreds of thousands of students at North American institutions of higher education routinely struggle to improve their writing in ESL to succeed in their academic studies. For people teaching such students, there has to be a foundational perspective on how to understand and address this situation. That is what the present book presents."
—Contemporary Psychology

"...the recent volume by Silva and Matsuda excels and is a significant milestone that marks a quarter-century of growth in a field that has now come into its own. The collection stands as a guidepost, directing the way toward continued fruitful investigation....this collection offers a strong historical perspective on the development of the field. Silva and Matsuda's intentional presentation of the included essays in chronological order enables readers to grasp this perspective clearly. Furthermore, most of the selections would be a strong addition to the reading list for a course in L2 composition instruction. All in all, ESL writing researchers should welcome this volume."
—The Modern Language Journal