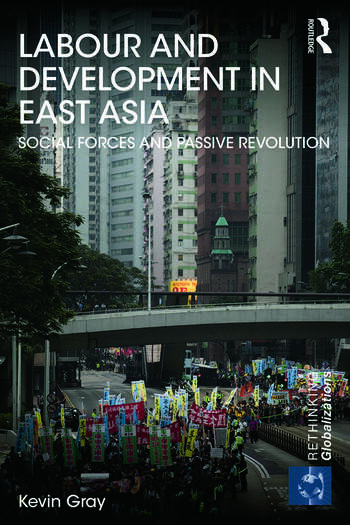 The Chinese Communist Party’s response to the wave of factory strikes in the early summer of 2010 has raised important questions about the role that labour plays in the transformation of world orders. In contrast to previous policies of repression towards labour unrest, these recent disputes centring round wages and working conditions have been met with a more permissive response on the part of the state, as the CCP ostensibly seeks to facilitate a transition away from a model of political economy based on ‘low-road’ labour relations and export dependence.

Labour and Development in East Asia shows that such inter-linkages between labour, geopolitical transformations, and states’ developmental strategies have been much more central to East Asia’s development than has commonly been recognised. By adopting an explanatory framework of the labour-geopolitics-development nexus, the book theorises and provides an historical analysis of the formation and transformation of the East Asian regional political economy from the end of the Second World War to the present, with particular reference to Japan, South Korea, Taiwan and China.

This book will be required reading for students and scholars of international relations, development studies and comparative politics.

Kevin Gray is a Senior Lecturer in International Relations at the University of Sussex. He is author of Korean Workers and Neoliberal Globalization, and co-editor of "Rising Powers and the Future of Global Governance" (with Craig N. Murphy), and "People Power in an Era of Global Crisis" (with Barry Gills).

'... Gray has written an informative and thought-provoking book. Teachers of global political economy and global labour studies will find it useful, as it critically summarizes writings on globalization and the rise of East Asia as an important industrial region.' - Anita Chan, University of Technology, Sydney, Australia