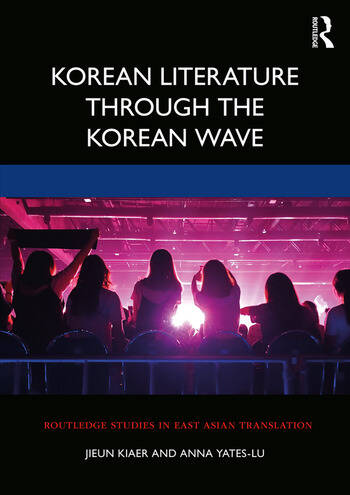 Korean Literature Through the Korean Wave

Korean Literature Through the Korean Wave engages with the rising interest in both the Korean Wave and Korean language learning by incorporating Korean Wave cultural content, especially K-dramas, films and songs, to underline and support the teaching of Korean literature.

It combines both premodern and modern texts, including poetry, novels, philosophical treatises, and even comics, to showcase the diversity of Korean literature. Particular care has been taken to include the voices of those marginalised in the often male, elite-dominated discourse on Korean literature. In particular, this book also distinguishes itself by extending the usual breadth of what is considered modern Korean literature up until the present day, including texts published as recently as 2017. Many of these texts are very relevant for recent discourse in Korean affairs, such as the obsession with physical appearance, the #MeToo movement and multiculturalism.

This textbook is aimed at B1-B2 level and Intermediate-Mid students of Korean. On the one hand the textbook introduces students to seeing beyond Korean literature as a monolithic entity, giving a taste of its wonderful richness and diversity. On the other hand, it provides an entry point into discussions on Korean contemporary society, in which the text (and associated media extracts) provides the catalyst for more in-depth analysis and debate.

Jieun Kiaer is Young Bin Min-Korea Foundation Associate Professor in Korean Language and Linguistics at the Oriental Institute of the University of Oxford. Her research interest lies in cross-linguistic and cross-cultural aspects of translation, particularly found in Korean-English translation. She has translated and published The Old Korean Poetry (2014), Jeju Language and Tales from the Edge of the Korean Peninsula (2014) and The Routledge Course in Korean Translation (2017). She has also recently finished Translation and Literature in East Asia: Between Visibility and Invisibility (2019, Routledge) with Jennifer Guest and Amy Xiofan Li. She is the Series Editor for the Routledge Studies in East Asian Translation.

is an Associate Faculty Member at the Oriental Institute of the University of Oxford. She recently completed her PhD on the traditional Korean sung storytelling art form p’ansori, titled ‘P’ansori Today: Reconciling Tradition and Creativity in Modern Society.’ Her most recent research project is studying consumption and performance of p’ansori by non-Koreans, and unpacking the complexity of interlocking cultural hierarchies that emerge through this. She also works as a Korean-English translator, particularly in translating poetry as song.

Korean Literature Through the Korean Wave