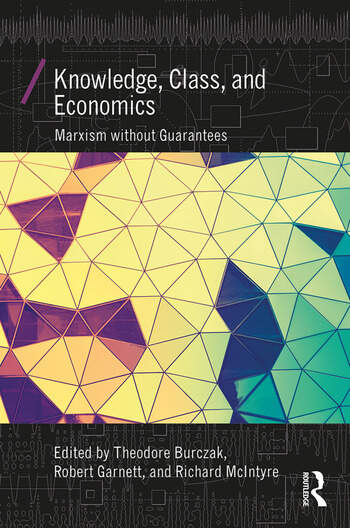 Knowledge, Class, and Economics: Marxism without Guarantees surveys the "Amherst School" of non-determinist Marxist political economy, 40 years on: its core concepts, intellectual origins, diverse pathways, and enduring tensions. The volume’s 30 original essays reflect the range of perspectives and projects that comprise the Amherst School—the interdisciplinary community of scholars that has enriched and extended, while never ceasing to interrogate and recast, the anti-economistic Marxism first formulated in the mid-1970s by Stephen Resnick, Richard Wolff, and their economics Ph.D. students at the University of Massachusetts-Amherst.

The title captures the defining ideas of the Amherst School: an open-system framework that presupposes the complexity and contingency of social-historical events and the parallel "overdetermination" of the relationship between subjects and objects of inquiry, along with a novel conception of class as a process of performing, appropriating, and distributing surplus labor. In a collection of 30 original essays, chapters confront readers with the core concepts of overdetermination and class in the context of economic theory, postcolonial theory, cultural studies, continental philosophy, economic geography, economic anthropology, psychoanalysis, and literary theory/studies.

Though Resnick and Wolff’s writings serve as a focal point for this collection, their works are ultimately decentered—contested, historicized, reformulated. The topics explored will be of interest to proponents and critics of the post-structuralist/postmodern turn in Marxian theory and to students of economics as social theory across the disciplines (economics, geography, postcolonial studies, cultural studies, anthropology, sociology, political theory, philosophy, and literary studies, among others).

Part I: Knowledge, class, and economics

A Conversation with Rick Wolff

Strangers in a Strange Land: A Marxian Critique of Economics

Marxian Economics without Teleology: The Big New Life of Class

Class and Overdetermination: Value Theory and the Core of Resnick and Wolff’s Marxism

Wolff and Resnick’s Interpretation of Marx’s Theory of Value and Surplus-Value: Where’s the Money?

The Last Instance: Resnick and Wolff at the Point of Heresy

Aleatory Marxism: Resnick, Wolff, and the Revivification of Althusser

The Cost of Anti-Essentialism

Marxism and Postmodernism: Our Goal is to Learn from One Another

Draining the "Blood Energy": Destruction of Independent Production and Creation of Migrant Workers in Post-Reform China

Problematizing the Global Economy: Financialization and the "Feudalization" of Capital

Reproduction of Noncapital: A Marxian Perspective on the Informal Economy in India

Management Ideologies and the Class Structure of Capitalist Enterprises: Shareholderism vs. Stakeholderism at Scott Paper Company

Lewis L. Lorwin’s "Five-Year Plan for the World": A Subsumed Class Response to the Crises of the 1930s

The Work of Sex

Family Farms, Class, and the Future of Food

A Long Shadow and Undiscovered Country: Notes on the Class Analysis of Education

Theodore Burczak is Professor of Economics at Denison University and author of Socialism after Hayek.

is Associate Dean and Honors Professor of the Social Sciences in the John V. Roach Honors College at Texas Christian University, USA.

Richard McIntyre is Professor of Economics and Chair of the Economics Department, University of Rhode Island, USA.