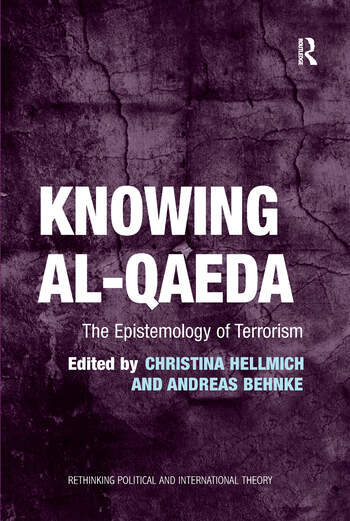 Knowing al-Qaeda: The Epistemology of Terrorism

Despite a plethora of studies devoted to it, the current understanding of al-Qaeda and the threat it poses remains vague and ambiguous. Is al-Qaeda a rigidly structured organisation, a global network of semi-independent cells, a franchise, or simply an ideology? What role did Osama bin Laden play within the group and its terrorist campaign? What does it mean to talk about the "global Salafi-jihad" threat allegedly confronting the West? In addressing such questions many writers have sought to offer definitive answers, yet overall the truth about al-Qaeda remains elusive. This book moves beyond this traditional approach in order to investigate and critically assess how such answers reflect the particular epistemological frameworks within which they are produced. Its chapters explore the varied contexts within which the obscure entity labelled al-Qaeda is constituted as a comprehensible object of political, strategic, cultural, and scientific knowledge, and within which 'terrorism' is rendered an experience of quotidian life. This volume offers a much-needed critical reflection on Western ways of talking and of thinking about the frightening experience of global terrorism. In trying to know how we know al-Qaeda, it offers us an opportunity to try to know ourselves and our often hidden assumptions about legitimacy, violence, and political purpose.

'The death of Osama bin Laden has done nothing to dispel the widespread confusion over the nature and meaning of al-Qaeda. This important collection opens up new vistas in the search for a deeper understanding of how and what we know about terrorism. Interesting, incisive, and illuminating of contemporary counter-terrorist culture, this is critical social science at its very best.' Richard Jackson, University of Otago, New Zealand 'This book provides important new analytical ways of understanding the nature of al-Qaeda and 9/11 that challenges conventional wisdom in how we frame the terrorists, what they seek to achieve through violence and the pitfalls of responding to it. The book incisively and provocatively pushes new intellectual boundaries as to how we chose to analyze and respond to terrorism as a polymorpheous phenomenon in the post 9/11 period. A must-read for students of terrorism studies.' Magnus Ranstorp, Swedish National Defence College, Sweden

Knowing al-Qaeda: The Epistemology of Terrorism