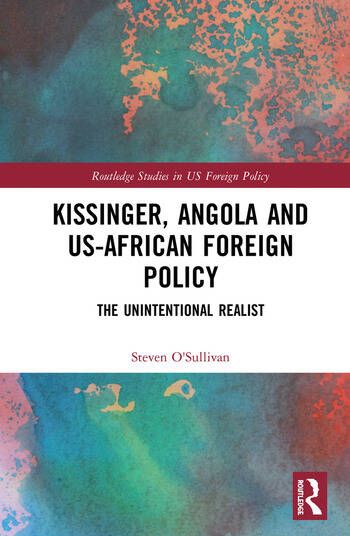 Analysing US foreign policy towards Angola during the Ford administration, this book provides an intriguing insight into one of the most avoidable and unfortunate episodes in Cold War history and explores the impact on Henry Kissinger’s much vaunted reputation for being guided by realist principles.

Kissinger has dominated political discourse and scholarship on US foreign policy since the 1970s, but although his legacy continues to generate controversy, little attention has been paid to the influence of Vietnam’s collapse on the US decision to covertly intervene in the Angolan civil war. This book argues that Kissinger’s concern for personal reputation and US credibility following the collapse of Vietnam led to a harmful and unrealistic policy toward Angola. Exposure of US covert intervention exacerbated domestic and international political tensions and the subsequent showdown between the excutive and legislative branches ironically resulted in Kissinger proclaiming a new departure in US–African relations. Thus, it is argued that Kissinger was an ‘unintentional realist’ rather than an intellectual proponent of realpolitik.

Enhancing our understanding of Kissinger, his relationship with his subordinates and with Congress, and his approach to foreign policy, this book will be of interest to scholars of Cold War history, US foreign policy and all those fascinated by the personality of Henry Kissinger.

Chapter Two: The Davis Nomination and the crisis of credibility in US Foreign Policy

Chapter Three: The Fallout: Kissinger, Davis and the State Department

Chapter Five: An Autumn of Discontent: The Collapse of IAFEATURE

Steven O’Sullivan graduated with a PhD in History from University College Cork, Ireland in 2014. He also holds a Masters in both International Relations and in Information Systems, as well as Bachelor of Arts in History and Archaeology. His research interests include: US Cold War Foreign Policy in the Third-World, the Vietnam syndrome and US executive and legislative relations.