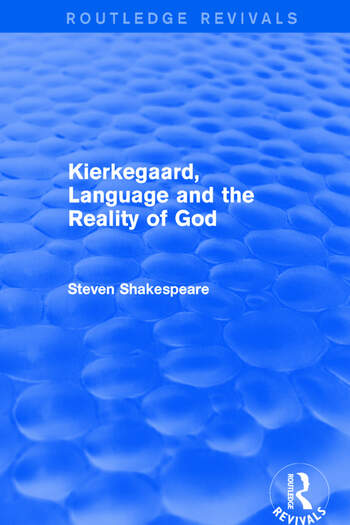 Kierkegaard, Language and the Reality of God

This title was first published in 2001: Debate about the reality of God risks becoming an arid stalemate. An unbridgeable gulf seems to be fixed between realists, arguing that God exists independently of our language and beliefs, and anti-realists for whom God-language functions to express human spiritual ideals, with no reference to a reality external to the faith of the believer. Soren Kierkegaard has been enlisted as an ally by both sides of this debate. Kierkegaard, Language and the Reality of God presents a new approach, exploring the dynamic nature of Kierkegaard's texts and the way they undermine neat divisions between realism and anti-realism, objectivity and subjectivity. Showing that Kierkegaard's understanding of language is crucial to his practice of communication, and his account of the paradoxes inherent in religious discourse, Shakespeare argues that Kierkegaard advances a form of 'ethical realism' in which the otherness of God is met in the making of liberating signs. Not only are new perspectives opened on Kierkegaard's texts, but his own contribution to ongoing debates is affirmed in its vital, creative and challenging significance.

'... Shakespeare produces not only a satisfying view of Kierkegaard but also an account of God, language and reality that is helpful for anyone dissatisfied with the alternatives of both anti-realism and traditional metaphysical realism... Shakespeare writes with an engaging passion. Although the discussion can be technical, each chapter has a helpful summary, and care is taken to explain the origins and key perspectives of contemporary (Continental) philosophy of language...this book has much to recommend it. As a discussion of Kierkegaard's view of language, it is both appealing and thorough.' Theology 'In this rich and suggestive book, Steven Shakespeare guides us through two important ways in which Kierkegaard's thought on language might be illuminating: first, with respect to language in general, in our relation to each other, and second, in relation to theological language... the importance of the topic and the quality of conceptual analysis, textual exegesis, and historical contextualization make this book rewarding reading.' Modern Theology '...Shakespeare’s is a well-written, frequently engaging study on an important subject, and is well worth reading.'' Ars Disputandi on-line journal '... a work which is both an exposition of Kierkegaard's own writing with all its multiple ironies and ellipses and an essay in the philosophy of language...' Modern Believing '[This book] is full of energy and precision. Shakespeare is convinced of the transforming reality of the God we meet in Christ, and for this reason he challenges both believers and sceptics to remove the ideological shackles by which that transformation is most readily avoided.' Connections '... a wonderful contribution to the ongoing debate between realist and anti-realist interpretations of Kierkegaard... Shakespeare is to be commended for his own passionate quest to inhabit the space of difference between realists and anti-realists. His search to be faithful to SK and God is in evidence thr

Kierkegaard, Language and the Reality of God