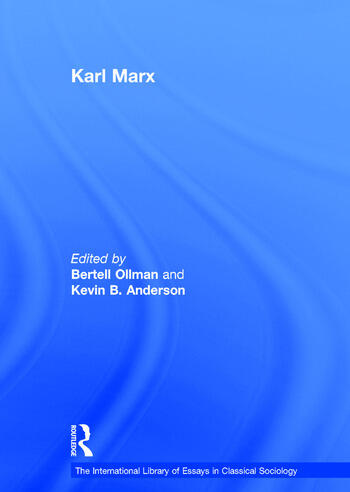 Marx's approach to analyzing society and especially his critique of capitalist society, continues to influence the work of a large number of scholars world-wide. Unfortunately, there are relatively few clear accounts of what this approach is and how to put it to use. And, despite the many attempts to use Marx's method to study a variety of subjects, there are relatively few that can serve as useful models. In the present volume, the internationally renowned Marxist scholar, Bertell Ollman, and the social theorist Kevin B. Anderson, have brought together a sampling of the best writings of the past hundred years that illustrate and critique Marx's method as well as explain what it is and how to put it to work. Anyone wishing to understand better Marx's dialectical method (along, of course, with the theories created with its help), or to revise this method or to criticize it, or to use it in their own work will find this collection invaluable.

Bertell Ollman is Professor of Politics at New York University. He has published widely on Marxist theory and his books include Alienation: Marx's Conception of Man in Capitalist Society (1971, 1976), Marxism: An Uncommon Introduction (1991), Dialectical Investigations (1993) The Dance of the Dialectic: Further Essays on Marx's Method (2001) and (as editor, with Edward Vernoff) The Left Academy: Marxist Scholarship on American Campuses 3 vols (1982, 1984, 1986). His books have been translated into Spanish, Italian, French, Chinese and Korean. In 2001 he was the recipient of the first Charles McCoy Life Achievement Award from the New Political Science section of the American Political Science Association. Kevin B. Anderson is Professor of Sociology, Political Science and Feminist Studies at University of California, Santa Barbara. He is the author of Lenin, Hegel and Western Marxism: A Critical Study (1995); Gender and the Seductions of Islamism (2005), and the co-author, with Janet Afary, of Foucault and the Iranian Revolution. He is the editor of Marx on Suicide (1999, co-edited with Eric A. Plaut); The Power of Negativity: Selected Writings on the Dialectic in Hegel and Marx by Raya Dunayevskaya (2002, co-edited with Peter Hudis); and The Rosa Luxemburg Reader (2004, co-edited with Peter Hudis). His third monograph, single-authored, is Marx at the Margins: On Nationalism, Ethnicity, and Non-Western Societies (University of Chicago, 2010) for which he received the 2011 Paul Sweezy Book Award from the Marxist Section of the American Sociological Association. He has published numerous articles on Marx and Marxism over 25 years.

’This collection of articles well illustrates the relevance and depth of Marxian analysis. It is an excellent reference.... Each article stands on its own and provides the reader with superb scholarship and impressive insights.’ Marx & Philosophy Review of Books