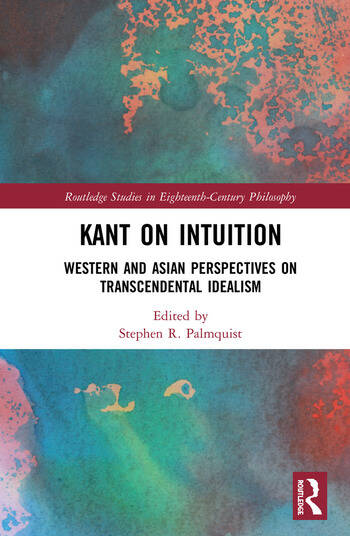 Kant on Intuition: Western and Asian Perspectives on Transcendental Idealism

Kant on Intuition: Western and Asian Perspectives on Transcendental Idealism consists of 20 chapters, many of which feature engagements between Kant and various Asian philosophers. Key themes include the nature of human intuition (not only as theoreticalŌĆöpure, sensible, and possibly intellectualŌĆöbut also as relevant to KantŌĆÖs practical philosophy, aesthetics, the sublime, and even mysticism), the status of KantŌĆÖs idealism/realism, and KantŌĆÖs notion of an object. Roughly half of the chapters take a stance on the recent conceptualism/non-conceptualism debate. The chapters are organized into four parts, each with five chapters. Part I explores themes relating primarily to the early sections of KantŌĆÖs first Critique: three chapters focus mainly on KantŌĆÖs theory of the "forms of intuition" and/or "formal intuition", especially as illustrated by geometry, while two examine the broader role of intuition in transcendental idealism. Part II continues to examine themes from the Aesthetic but shifts the main focus to the Transcendental Analytic, where the key question challenging interpreters is to determine whether intuition (via sensibility) is ever capable of operating independently from conception (via understanding); each contributor offers a defense of either the conceptualist or the non-conceptualist readings of KantŌĆÖs text. Part III includes three chapters that explore the relevance of intuition to KantŌĆÖs theory of the sublime, followed by two that examine challenges that Asian philosophers have raised against KantŌĆÖs theory of intuition, particularly as it relates to our experience of the supersensible. Finally, Part IV concludes the book with five chapters that explore a range of resonances between Kant and various Asian philosophers and philosophical ideas.

Part I: The Role of Intuition in Geometry and Transcendental Idealism

2. Kant, Euclid, and the Formal Intuition of Space Hoke Robinson and Dan Larkin

4. Pure Intuitions and Pure Forms of Intuition in the Transcendental Aesthetic and Elsewhere Gregg Osborne

Part II: The Function and Status of Intuition in Human Cognition

6. The Given in Theoretical and Practical Cognition: Intuition and the Moral Law Lucy Allais

7. Intuitions Under the Asymmetric Structure of the SubjectŌĆōObject Relation: A Conceptualist Reading based on the B Deduction Xi Chen

10. Negative Certainties: N─üg─ürjunaŌĆÖs Challenge to Kant on the ŌĆ£TogethernessŌĆØ of Intuition and Concepts Ellen Y. Zhang

Part III: The Sublime and the Challenge of the East on Intuiting the Supersensible

11. The "Sublime", the "Supersensible Substrate", and "Spirit": Intuitions of the Ultimate in KantŌĆÖs Third Critique John H. Zammito

15. Intuition as a Blend of Cognition and Consciousness: An Examination of the Philosophies of Kant and Krishnamurti Krishna Mani Pathak

Part IV: East-West Perspectives on the Role of Intuition in Philosophy

18. A Confucian Account of Intelligible Intuition in the Teachings of Liu Zongzhou Simon Sai-ming Wong

20. The Paradox of Representation in NishitaniŌĆÖs Critique of Kant Gregory S. Moss

Stephen R. Palmquist, Professor of Religion and Philosophy at Hong Kong Baptist University since 1987, has 190+ publications, including 100 refereed articles and book chapters. His 12 books include KantŌĆÖs System of Perspectives (1993), KantŌĆÖs Critical Religion (2000), Cultivating Personhood (2010), and Comprehensive Commentary on KantŌĆÖs Religion (2016).

Kant on Intuition: Western and Asian Perspectives on Transcendental Idealism