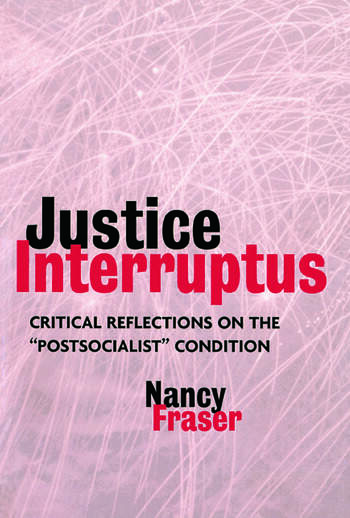 Nancy Fraser is Professor of Political Science in the Graduate Faculty of the New School for Social Research. She is the author of Unruly Practices: Power, Discourse and Gender in Contemporary Social Theory (1989), the co-author of Feminist Contentions: A Philosophical Exchange (Routledge, 1994), and the co-editor of Revaluing French Feminism: Critical Essays on Difference, Agency, and Culture (1992).

"Justice Interruptus is a timely and important book that will no doubt provoke much discussion and reflection." -- Contemporary Sociology
"Through a penetrating series of interventions in contemporary debates in social and political thought, Nancy Fraser tries to overcome the false oppositions of what she names 'our post-socialist condition.' Arguing that the separation of struggles for recognition of diverse identities from struggles for distribution of material goods and services is a false juxtaposition, she attempts to show how the 'social' and the 'cultural' left can once more come together around common goals." -- Seyla Benhabib, Harvard University
"This collection of articles forms a highly innovative and original endeavor to 'interrupt' the conventional discussion on justice by questioning both our underlying interpretation of specific needs and desires, and our normative concepts and notions. Thus, we come much closer to an idea of what it could mean under 'postsocialist' conditions to treat different groups or individuals equally." -- Axel Honneth, Johann Wolfgang Goethe Universitat
"Nancy Fraser is one of the most creative social philosophers and critical theorists of her generation. This book is vintage Fraser--historically grounded, theoretically advanced and politically progressive." -- Cornel West, Harvard University
"What Fraser does throughout the book, and it is a great achievement indeed, is to identify a series of unproductive divisions--between critical theory and poststructuralism, socioeconomic analysis and cultural analysis, the politics of distribution and the politics of recognition, equality and difference--and attempt to construct a more integrative approach..." -- SIGNS, Summer 2002