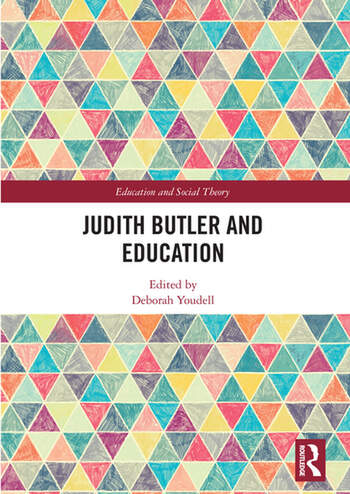 The work of Judith Butler has been at the forefront of both theorising the subject as a product of power and explicating possibilities for political alliances and action that are available to such subjects. Mobilising a range of philosophical resources from Hegel and Foucault to Lacan, Levinas Wittig and Arendt, her work has held a core concern with the way that the subject is made in terms of sex, gender and sexuality and has been an invaluable resource in the development of queer theory and thinking about queer practice.

Butler’s scholarly work has been aimed primarily at a philosophical audience, yet her insights into the constitution, constraint and agency of subjects are profoundly political and have become invaluable resources in feminist, queer, anti-racist and anti-capitalist work. Over the last two decades she has been a major influence on research concerned with social justice in education and has changed the ways that classroom practices and relationships can be understood, transforming the way we think about both ‘teacher’ and ‘student’. This collection brings together some of the most outstanding work in education that has developed and applied Butler’s work to empirical questions, translating her philosophy for an education audience and providing compelling analyses of the ways that the subjects of education are made, how inequalities are produced in the minutiae of practice and how education’s subjectivated subjects can act politically.

The chapters in this book were originally published as articles in Taylor and Francis journals.

1. Subjectification: the relevance of Butler’s analysis for education Bronwyn Davies

4. Normative cruelties and gender deviants: the performative effects of bully discourses for girls and boys in school Jessica Ringrose and Emma Renold

7. Towards a research framework for race in education: critical race theory and Judith Butler Charlotte Chadderton

9. Fabricating ‘Pacific Islander’: pedagogies of expropriation, return and resistance and other lessons from a ‘Multicultural Day’ Deborah Youdell

11. The curriculum as a site of counter politics: theorising the ‘domain of the sayable’ Laura Teague

Deborah Youdell is Professor of Sociology of Education in the School of Education at the University of Birmingham, UK. Her work develops analyses of the relationship between policy, practice and inequalities, and how inequalities are connected to subjectivities, everyday practices, pedagogy, institutional processes and policy. Her research has spanned issues of race, ethnicity, gender, sexuality, religion, social class, ability and disability and has been underpinned by her engagement with the work of Judith Butler. She is the author of School Trouble: identity, power and politics in education (2010), Impossible Bodies and Impossible Selves: exclusions and student subjectivities (2006), and Rationing Education: policy, practice, reform and equity (with David Gillborn, 1999). Her recent work is at the forefront of the developing field of biosocial education, which brings emerging knowledge in the new biological sciences together with sociological accounts of schooling and student subjectivities.