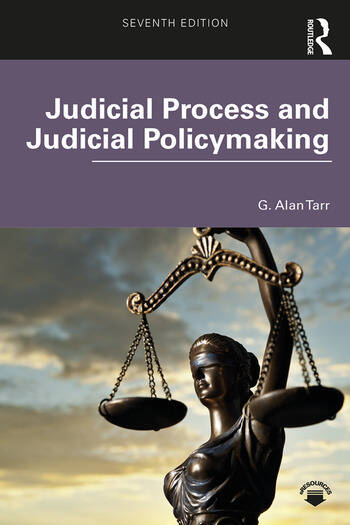 An excellent introduction to judicial politics as a method of analysis, the seventh edition of Judicial Process and Judicial Policymaking focuses on policy in the judicial process. Rather than limiting the text to coverage of the U.S. Supreme Court, G. Alan Tarr examines the judiciary as the third branch of government, and weaves four major premises throughout the text: 1) Courts in the United States have always played an important role in governing and their role has increased in recent decades; 2) Judicial policymaking is a distinctive activity; 3) Courts make policy in a variety of ways; and 4) Courts may be the objects of public policy, as well as creators.

New to the Seventh Edition

■ New cases through the end of the Supreme Court’s 2018 term.

■ New case studies on the Garland-Gorsuch controversy; plea negotiation (of special relevance to the Trump administration); and the litigation over Obamacare, as well as brief coverage of the Kavanaugh confirmation.

■ Expanded coverage of the crisis in the legal profession, sentencing with attention to the rise of mass incarceration and the issue of race, constitutional interpretation and the rise of “originalism,” and same-sex marriage.

■ Updated tables and figures throughout.

■ A new online e-Resource including edited cases, a glossary of terms, and resources for further learning.

This text is appropriate for all students of judicial process and policy.

1 Courts and the Law

Part I Structures and Participants in the Judicial Process

2 The Federal and State Court Systems

6 Criminal Justice and the Courts

7 Civil Justice and the Courts

received his doctorate from the University of Chicago. He is Board of Governors professor of political science emeritus and founder of the Center for State Constitutional Studies at Rutgers University, Camden. Professor Tarr has served as a constitutional consultant in Russia, South Africa, Cyprus, and Burma. A three-time NEH Fellow, he has most recently completed a study of judicial independence and accountability in the American states.