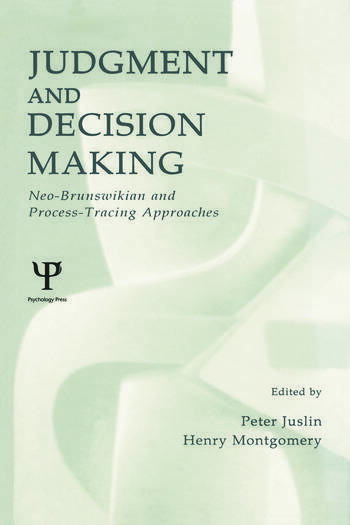 Research on human judgment and decision making has been strongly guided by a normative/descriptive approach, according to which human decision making is compared to the normative models provided by decision theory, statistics, and the probability calculus. A common empirical finding has been that human behavior deviates from the prescriptions by normative models--that judgments and decisions are subject to cognitive biases.

It is interesting to note that Swedish research on judgment and decision making made an early departure from this dominating mainstream tradition, albeit in two different ways. The Neo-Brunswikian research highlights the relationship between the laboratory task and the adaptation to a natural environment. The process-tracing approach attempts to identify the cognitive processes before, during, and after a decision. This volume summarizes current Swedish research on judgment and decision making, covering topics, such as dynamic decision making, confidence research, the search for dominance structures and differentiation, and social decision making.

"This book is rich in ideas, and arguments from evidence to conclusions are generally cogent....one thing is clear; by stepping beyond the rigid strictures of a context-free, idealized rationality, this book sheds light on behavioral situations where no social scientist nor decision theorist has yet displayed either the insight or the courage to specify normative conduct. Work like this contributes to the naturalization of J/DM (judgment and decision making) theory, making it ever more continuous with the rest of cognitive psychology."
—Applied Cognitive Psychology

"The volume certainly is not of interest to Swedish researchers only. As the American contributors Kenneth Hammond and Baruch Fischhoff point out in their closing chapters, Swedish JDM research is well known and appreciated far beyond Sweden....The volume contains original chapters and no reprints of previously published articles. It is well written, and leaves the reader impressed by the standard of Swedish judgment and decision-making research. Indeed, this evaluation has been put forward eloquently by the two 'outsiders' (Hammond and Fischhoff) in their final commentaries."
—Journal of Behavioral Decision Making