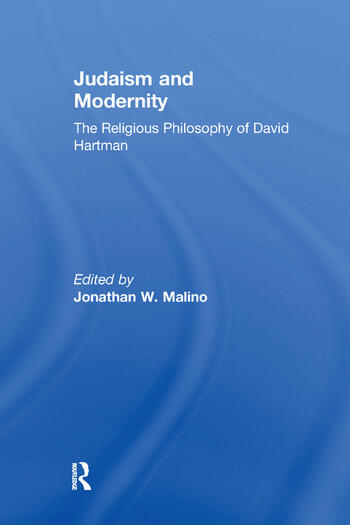 Judaism and Modernity: The Religious Philosophy of David Hartman

In the past quarter-century, David Hartman has established himself as one of the pre-eminent religious and Jewish thinkers of our age. Refusing to be limited by the traditional focus on metaphysics and theology, Hartman has developed a religious philosophy through sustained reflection on the concrete experience of individual, communal and national Jewish life. In Judaism and Modernity, prominent Israeli and American scholars of philosophy, religion, law, political theory, and Judaism engage Hartman's wide-ranging and provocative work. Touched by Hartman's passion for religious dialogue, humanism, and the interplay between traditional texts and modern thought, the contributors advance their own ideas on the philosophy of religion, religious anthropology, pluralism, Zionism, and medieval Jewish philosophy. This is a rich collection for students, professional academicians, and all who seek to incorporate the wisdom of the past into the evolving wisdom of the future.

Contents: Introduction; Part I Philosophy Of Religion: Judaism in light of the rebirth of the state of Israel: the philosophy of David Hartman, Donniel Hartman; David Hartman and the crisis in modern faith, Moshe Halbertal; In what sense is David Hartman a Jewish theologian?, Moshe Idel; Interpretation beyond metaphysics, Shira Wolosky; Why David Hartman isn't a 'philosophical theologian', Jonathan W. Malino and Henry Samuel Levinson; Time and religious consciousness in the thought of David Hartman, Dror Yinon; From anthropology to metaphysics: David Hartman on divine intervention, David Shatz. Part II Religious Anthropology: Mastery and hubris in Judaism: the religious anthropology of David Hartman, Michael J. Sandel; Educating for spiritual maturity: Hartman's interpretation of Judaism as a 'religion for adults', Jonathan Cohen; Biblical faith and the roots of human dignity, Peter Berkowitz; Adam and our selves, George P. Fletcher; The Akedah in the thought of David Hartman, Yehuda Gellman; The covenant of conscience, Harold M. Schulweis; Memory, Ruth Anna Putnam; A faith-ful Jewish critical interpretation of the Bible, Moshe Greenberg; The rabbinic ideal of the peacemaker: David Hartman reads Maimonides' Laws of Hanukkah, Noam Zion; Love thy companion as thyself: musings on its usage in Tannaitic literature and the sermon on the mount, Marc Hirshman. Part III Pluralism And Zionism: The Pluralism of David Hartman, Hilary Putnam; David Hartman, Paul van Buren and Franz Rosenzweig on Jewish-Christian dialogue, Rivka Horowitz; David Hartman on the attitudes of Soloveitchik and Heschel towards Christianity, Ephraim Meir; Can interpretive freedom be unlimited?, Sanford Levinson; Interpretive fluidity and P'sak in a case of Pidyon Sh'vuyim: a modern Israeli reponsum illuminated by the thought of David Hartman, David Ellenson; Zionism and Judaism, Michael Walzer; Israel and the creation of pluralistic covenantal community, Arnold Eisen; Strangers in our home: Hartman on peace with the Palestinians, Warren Zev Harvey. Part IV Maimonides And Halevi: Maimonides on Amalek, self-corrective mechanisms, and the war against idolatry, Josef Stern; The unity of Maimonides' religious thought: the laws of mourning as a case study, Lawrence Kaplan; Maimonides on the 'normality' of Hebrew, Menachem Kellner; Who has implanted within us eternal life: Judah Halevi on immortality and the afterlife, Barry S. Kogan. Appendix: David Hartman's Life and Thought, Avi Sagi and Zvi Zohar; Writings of David Hartman; Index.

Judaism and Modernity: The Religious Philosophy of David Hartman