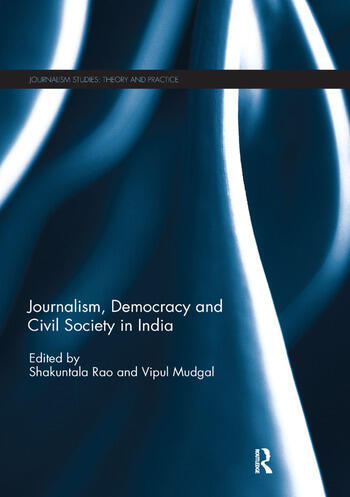 Since independence in 1947 India has remained a stable and functioning democracy in the face of enormous challenges. Amid a variety of interlinking contraries and a burgeoning media – one of the largest in the world – there has been a serious dearth of scholarship on the role of journalists and dramatically changing journalism practices. This book brings together some of the best known scholars on Indian journalism to ask questions such as: Can the plethora of privately run cable news channels provide the discursive space needed to strengthen the practices of democracy, not just inform results from the ballot boxes? Can neoliberal media ownership patterns provide space for a critical and free journalistic culture to evolve? What are the ethical challenges editors and journalists face on a day-to-day basis in a media industry which has exploded? In answering some of these questions, the contributors to this volume are equally sensitive to the historical, social, and cultural context in which Indian journalism evolved, but they do not all reach the same conclusion about the role of journalism in Indian civil society and democracy. This book was originally published as a special issue of Journalism Studies.

3. A Media Not for All: A comparative analysis of journalism, democracy and exclusion in Indian and South African media Shakuntala Rao and Herman Wasserman

8. Connecting Activists and Journalists: Twitter communication in the aftermath of the 2012 Delhi rape Thomas Poell and Sudha Rajagopalan

10. Our Media, Our Principles: Building codes of practice for community radio in India Kanchan K. Malik

Shakuntala Rao is Professor in the Department of Communication Studies at the State University of New York, Plattsburgh, NY, USA.

heads the Common Cause and Inclusive Media for Change organisations. He has been founding Director of Publics and Policies Programme and a Visiting Senior Fellow at the Centre for the Study of Developing Societies, Delhi, India. He works on the intersections of media, democracy and political violence.