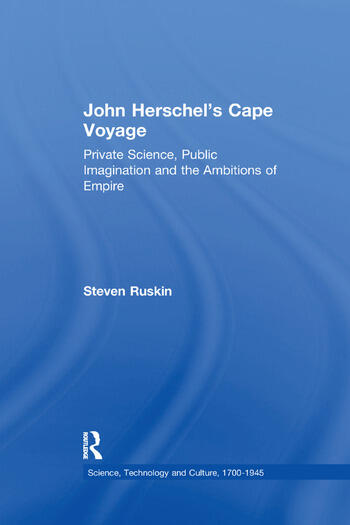 In 1833 John Herschel sailed from London to Cape Town, southern Africa, to undertake (at his own expense) an astronomical exploration of the southern heavens, as well as a terrestrial exploration of the area around Cape Town. After his return to England in 1838, and as a result of his voyage, he was highly esteemed and became Britain's most recognized man of science. In 1847 his southern hemisphere astronomical observations were published as the Cape Results. The main argument of Ruskin's book is that Herschel's voyage and the publication of the Cape Results, in addition to their contemporary scientific importance, were also significant for nineteenth-century culture and politics. In this book it is demonstrated that the reason for Herschel's widespread cultural renown was the popular notion that his voyage to the Cape was a project aligned with the imperial ambitions of the British government. By leaving England for one of its colonies, and pursuing there a significant scientific project, Herschel was seen in the same light as other British men of science (like James Cook and Richard Lander) who had also undertaken voyages of exploration and discovery at the behest of their nation. It is then demonstrated that the production of the Cape Results, in part because of Herschel's status as Britain's scientific figurehead, was a significant political event. Herschel's decision to journey to the Cape for the purpose of surveying the southern heavens was of great significance to almost all of Britain and much of the continent. It is the purpose of this book to make a case for the scientific, cultural, and political significance of Herschel's Cape voyage and astronomical observations, as a means of demonstrating the relationship of scientific practice to broader aspects of imperial culture and politics in the nineteenth century.

Steven Ruskin is a professor at the Colorado Technical University, in the USA.

'... all astronomers with an interest in the historical background of their subject will learn much from this informative account of one of the greatest contributions to observational astronomy.' Journal of the British Astronomical Association '... contains a wealth of detailed information, in particular about the progress through the press of the volume of Cape observations, and this will be of much interest to students of John Herschel.' Journal for the History of Astronomy 'This closely focused and clearly presented book makes a significant contribution to the substantial literature on the life and scientific achievements of John Herschel.' Journal of Southern African Studies 'With clear writing informed by thorough archival investigation, Steven Ruskin supplies an intriguing analysis of John Herschel's 1833-38 trip to Cape Town and of the events leading to the publication of his Cape results.' Notes and Records 'I recommend that you add it to your library.' Journal of Astronomical History and Heritage '... likely to be of immense value not only to Herschel buffs and historians of astronomy, but also to historians of science in the Cape and other British colonies.' BJHS