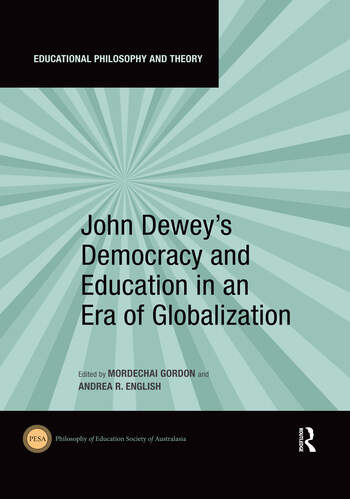 John Dewey's Democracy and Education in an Era of Globalization

2016 marked the hundred-year anniversary of John Dewey’s seminal work Democracy and Education. This centennial presented philosophers and educators with an opportunity to reexamine and evaluate its impact on various aspects of education in democratic societies. This volume brings together some of the leading scholars on John Dewey and education from around the world in order to reflect on the legacy of Democracy and Education, and, more generally, to consider the influence of Dewey’s ideas on education in the twenty-first century. John Dewey’s Democracy and Education in an Era of Globalization is unique in that it explores some important tensions and relationships among Dewey’s ideas on democracy, education, and human flourishing in an era of globalization. The contributors make sense of how Dewey would have interpreted and responded to the phenomenon of globalization.

This book was originally published as a special issue of Educational Philosophy and Theory.

3. Not ‘democratic education’ but ‘democracy and education’: Reconsidering Dewey’s oft misunderstood introduction to the philosophy of education John Quay

4. Thinking my way back to you: John Dewey on the communication and formation of concepts Megan J. Laverty

5. John Dewey and the Role of the Teacher in a Globalized World: Imagination, empathy, and ‘third voice’ Andrea R. English

7. Why Should Scholars Keep Coming Back to John Dewey? Mordechai Gordon

Andrea R. English is Chancellor’s Fellow in Philosophy of Education at the Moray House School of Education, University of Edinburgh, UK, and Senior Fellow of the Higher Education Academy. She is author of Discontinuity in Learning: Dewey, Herbart, and Education as Transformation (2013), co-editor of John Dewey's Democracy and Education: A Centennial Handbook (2017), and her research on teaching and learning has been published in a range of international journals and edited volumes.

John Dewey's Democracy and Education in an Era of Globalization