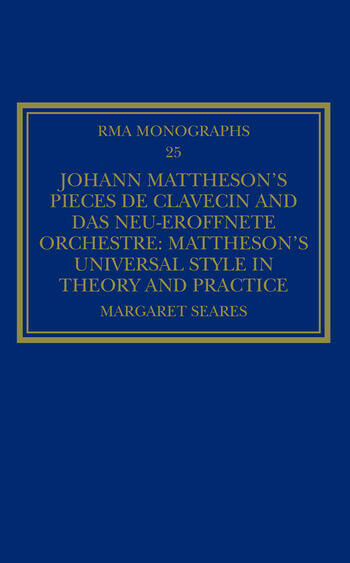 A prolific music theorist and critic as well as an established composer, Johannes Mattheson remains surprisingly understudied. In this important study, Margaret Seares places Mattheson’s Pièces de clavecin (1714) in the context of his work as a public intellectual who encouraged German musicians and their musical public to eschew what he saw as the hidebound traditions of the past, and instead embrace a universalism of style and expression derived from contemporary currents in music of the leading European nations. Beginning with the early non-musical writings by Mattheson, Seares places them in the context of the cosmopolitan city-state of Hamburg, before moving to a detailed study of his first major musical treatise Das neu-erÃ¶ffnete Orchestre of 1713, in which he espoused his views about the musics of the past and present and, in particular, the characteristics of the musics of Germany, Italy, France and England. This latter section of the treatise, Part III, is edited and translated into English in the book's appendix - the first such translation available. Seares then moves on to an evaluation of the Pièces de clavecin as a work in which Mattheson reflects in musical terms the themes of modernism (in the sense of Ã  la mode) and universalism that are such a strong part of his writings of the period, and a work that represents an important precursor for the keyboard suites of Johann Sebastian Bach and Georg Frideric Handel.

Emeritus Professor Margaret Seares retired from her role as Senior Deputy Vice Chancellor at The University of Western Australia in 2008. Since her retirement from university administration she has resumed her research work, which focuses on early eighteenth-century music and on Australian cultural policy. She has articles in Early Music and Eighteenth-Century Music and was responsible for the preparation of the online article on Australia’s cultural policy for the Council of Europe. Seares is co-author, with Kay Stevenson, of Paradise Lost in Short: Smith, Stillingfleet and the Transformation of Epic (1998) with co-author Kay Stevenson.

’This book offers an important and fascinating insight into how the world of musical style was viewed in early 18th-century Germany. The translation of Part 3 of Mattheson’s treatise is invaluable.’ Douglas Hollick, The Consort