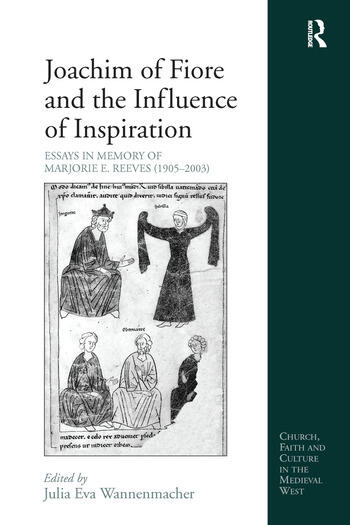 Joachim of Fiore and the Influence of Inspiration: Essays in Memory of Marjorie E. Reeves (1905-2003)

Joachim of Fiore and the Influence of Inspiration. Essays in Memory of Marjorie E. Reeves (1905-2003) is a title that is deliberately reminiscent of the title of Marjorie Reeves’ opus magnum: her book ’The Influence of Prophecy in the Later Middle Ages’ has been fundamental in the field of Joachimist studies from its publication in 1969 right up until today. The present volume is inspired both by Joachim of Fiore’s lasting influence, which can be found in many places from the early thirteenth century until postmodern times, and by Marjorie Reeves’s unsurpassed scholarly achievements and her inspiring personality. British, Continental and American scholars of several generations, from different academic disciplines, follow the paths she has opened, try to answer questions she was the first to ask, offer new insights and new texts in state of the art editions, immersing themselves deeply into materials Marjorie Reeves had provided us with in the field of Joachimism and the influence of prophecy. The volume is divided into three parts. In the first, the studies shed new light on different aspects of Joachim of Fiore’s life and work. The second and third parts are dedicated to Joachim’s afterlife -- with the contemporary and late medieval reception of Joachim’s thought in the Iberian Peninsula, England, and Provence, and then on on Joachim’s Wirkungsgeschichte in early modern England and Germany.

Dr Julia Eva Wannenmacher has been working for the critical edition of the Opera omnia of Joachim of Fiore since 1994. Her Ph.D. thesis (2002) dealt with Joachim's conception of history and apocalypticism in his treatise De septem sigillis. In 2012 she was Visiting Fellow at the International Consortium for Research in the Humanities 'Fate, Freedom and Prognostication' at the University of Erlangen-Nuremberg, where she prepared the edition of the pseudo-joachite text Super Ieremiam. She also teaches Medieval History at the Humboldt-University of Berlin.

'... a worthy memorial to the achievement of Marjorie Reeves. Its focus on the thought of Joachim and on the influence of texts that he may have inspired demonstrates that his writings still generate attention for their interest in the flow of history and their critique of an established order, always in need of reform.' Sehepunkte

Joachim of Fiore and the Influence of Inspiration: Essays in Memory of Marjorie E. Reeves (1905-2003)