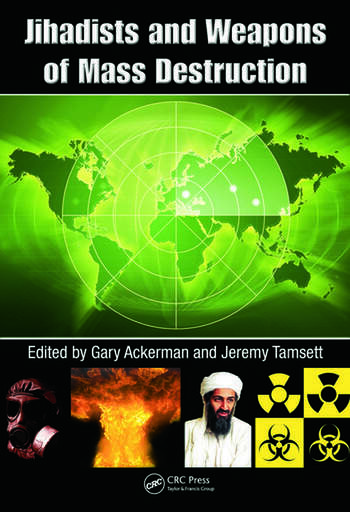 Jihadists and Weapons of Mass Destruction

Written for professionals, academics, and policymakers working at the forefront of counterterrorism efforts, Jihadists and Weapons of Mass Destruction is an authoritative and comprehensive work addressing the threat of weapons of mass destruction (WMD) in the hands of jihadists, both historically and looking toward the future threat environment. Providing insight on one of the foremost security issues of the 21st century, this seminal resource effectively:

Leading international experts clearly differentiate between peaceful Muslims and jihadists, exploring how jihadists translate their extreme and violent ideology into strategy. They also focus on WMD target selection and the spread of WMD knowledge in jihadist communities. Devoid of sensationalism, this multidimensional evaluation adds a heightened level of sophistication to our understanding of the prospects for and nature of jihadist WMD terrorism.

Gary Ackerman is Research Director of the National Consortium for the Study of Terrorism and Responses to Terrorism (START), a Department of Homeland Security National Center of Excellence based at the University of Maryland. His research work focuses on threat assessment and terrorism involving unconventional weapons.

Jeremy Tamsett is a consultant for Henley-Putnam University and an analyst at the Center for Terrorism and Intelligence Studies (CETIS), a research center dedicated to identifying, better comprehending, and accurately assessing the present and future security threats stemming from a variety of violence-prone extremists and their enablers. He has served as Project Manager for the U.S. Government funded Critical Infrastructure Terrorist Attack database and Global Terrorism Database (GTD).

Jihadist Ideology and Strategy and the Possible Employment of Weapons of Mass Destruction, Jeffrey M. Bale

Jihadi Capabilities and the Diffusion of Knowledge, Sammy Salama and Edit Bursac

THE AGENTS OF HARM

THE ONCE AND FUTURE THREAT

The Future of Jihadists and WMD: Trends and Emerging Threats, Gary Ackerman

Appendix B: Delphi Exercise Instructions: The Future of WMD and Jihadists: Trends and Emerging Threats

". . . a detailed, well thought out analysis of the situation as it exists today and is intended for the serious reader or researcher."

". . . exceptionally authoritative and comprehensive . . . adds a heightened level of sophistication to our understanding of the prospects for and nature of jihadist WMD terrorism. The volume will become a guidepost to future research on the topic."

"Providing insight on one of the foremost security issues of the 21st century, this seminal resource effectively documents current trends in the ideology, strategy, and tactics of jihadists as they relate to WMD.  The book also provides an overview of nonproliferation policies designed to keep WMD out of the hands of jihadists, conducts a groundbreaking quantitative empirical analysis of jihadist behavior, and includes leading experts' estimates of the future WMD threat from jihadists."

Jihadists and Weapons of Mass Destruction