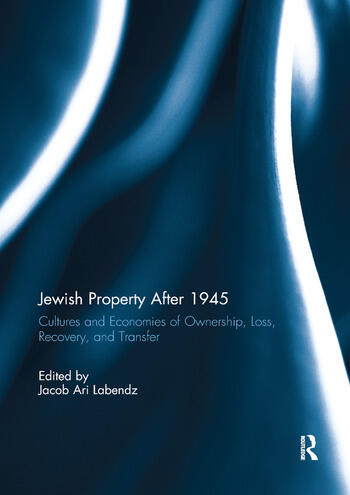 Jewish Property After 1945: Cultures and Economies of Ownership, Loss, Recovery, and Transfer

Questions arose after 1945, and have persisted, about the ownership of properties which had belonged to Jewish communities before the Second World War, to Holocaust victims and survivors, and to Jewish expellees from the Middle East and North Africa. Studies of these properties have often focused on their symbolic values, their places in cultures of memory and identity construction, and measures of justice achieved or denied.

This collection explores contesting conceptions of ownership and property claims advanced in the post-war years. The authors focus considerably upon how conflicts over these properties both shaped and reflected shifting and competing ideas about Jewish belonging. They show their outcomes to have had considerable consequences for the lived experiences of both Jews and non-Jews around the world. This is because the properties in questions always maintained their worth as material assets, just as they could also impart financial liabilities and other responsibilities to their stewards, regardless of the morality of their title. The unique decision to include studies of European, Middle Eastern, and North African communities into one volume represents an attempt to achieve a more globally sensitive language for thinking about these histories, especially at their points of contact and mutual-reference. This book was originally published as a special issue of Jewish Culture and History.

Introduction – Jewish property after 1945: cultures and economies of ownership, loss, recovery, and transfer  1. The amnesia of the Wirtschaftswunder: Essen’s ‘House of Industrial Design’  2. Toward a material culture of Jewish loss  3. Unsettled possession: the question of ownership of Jewish sites in Poland after the Holocaust from a local perspective  4. Synagogues for sale: Jewish-State mutuality in the communist Czech lands, 1945–1970  5. Property Claims of Jews from Arab Countries: political, monetary, or cultural?  6. Grave connections: Algeria’s Jewish cemeteries as sites of diaspora-homeland contact  7. Reconnecting with a fugitive collection: a case study of the records of JDC’s Warsaw Office, 1945–1949

is the Clayman Assistant Professor of Judaic and Holocaust Studies and the Director of the Center for Judaic and Holocaust Studies at Youngstown State University, Youngstown, OH, USA. He writes about the history of Jews in and from Central Europe with a focus on post-war Czechoslovakia, communism, and antisemitism. He also participates in broader discussions on contemporary Jewish politics, Holocaust memory, and nationalism. He holds a PhD in History from Washington University in Saint Louis, St. Louis, MO, USA.

Jewish Property After 1945: Cultures and Economies of Ownership, Loss, Recovery, and Transfer