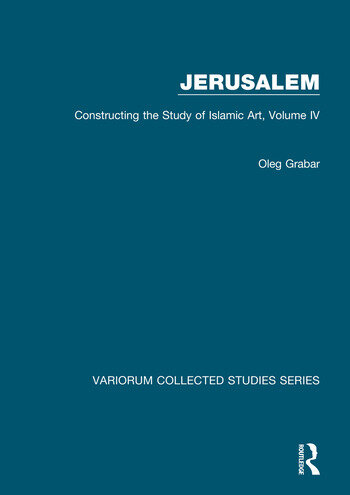 Jerusalem is the final volume in a set of four selections of studies on Islamic art by Oleg Grabar. Between them they bring together more than eighty articles, studies and essays, work spanning half a century by a master of the field. Each volume takes a particular section of the topic, the three others being entitled: Early Islamic Art 650-1100, Islamic Visual Culture, 1100-1800, and Islamic Art and Beyond. Reflecting the many incidents of a long academic life, they illustrate one scholar's attempt at making order and sense of 1400 years of artistic growth. They deal with architecture, painting, objects, iconography, theories of art, aesthetics and ornament, and they seek to integrate our knowledge of Islamic art with Islamic culture and history as well as with the global concerns of the History of Art. In addition to the articles selected, each volume contains an introduction which describes, often in highly personal ways, the context in which Grabar's scholarship developed and the people who directed and mentored his efforts. The focus of this volume is what is now known as the Old City of Jerusalem. This plays a unique role in Islamic culture, as a city whose physical shape was created by a succession of Muslim rulers on a base created by the Roman empire. And then Jerusalem shelters the Dome of the Rock, the first major building sponsored by a Muslim patron and one of the masterpieces of medieval architecture. Yet it is a building whose original purpose is still obscure. The articles selected for this volume represent nearly half a century of concern, by one of the world's foremost authorities on the subject, for this extraordinary city, for its buildings, and for the nexus of meanings associated with them.

Oleg Grabar is Emeritus Professor in the School of Historical Studies at the Institute for Advanced Study, Princeton, USA, and Aga Khan Professor Emeritus of Islamic Art and Architecture at Harvard University, USA.

'This is a valuable reference book for all and a must read for Muslims who wish to understand how 'others' view the Islamic holy city of Jerusalem in which Muslims proudly proclaim the sanctity of Jews and Christians.' Al-Aqsa 'Ashgate Variorum has now acknowledged Grabar's signal contribution to the field with a beautifully produced four-volume collection of his shorter publications. Grabar's former students and numerous other fans will welcome the ready access this matched set affords to scores of Grabar's articles... Even readers broadly familliar with Grabar's variegated contributions to the field will find something new here. In its very thougthful thematic arrangement, this collection presents a comprehensive methodological overview that truly lives up to its series title, Constructing the Study of Islamic Art... All in all, this marvelous collection by a truly memorable man belongs in every serious art history collection.' Religion and the Arts