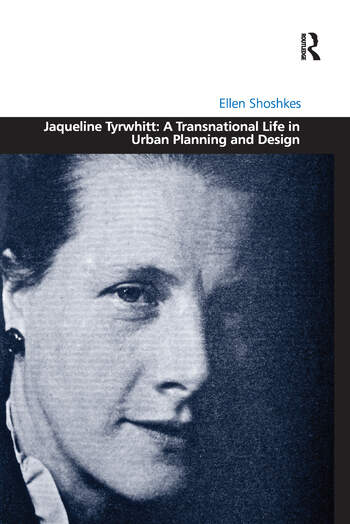 Jaqueline Tyrwhitt: A Transnational Life in Urban Planning and Design

Jaqueline Tyrwhitt’s life story is truly a gap in the planning and urban design literature: while largely unacknowledged, she played a central role in twentieth-century design history. Here, Ellen Shoshkes provides a full and insightful appraisal of the British town planner, editor, and educator who was at the center of the group of people who shaped the post-war Modern Movement. Beginning with an examination of her early work planning for the physical reconstruction of post-war Britain, Shoshkes argues that Tyrwhitt forged a highly influential synthesis of the bioregionalism of the pioneering Scottish planner Patrick Geddes and the tenets of European modernism, as adapted by the Mars group, the British chapter of CIAM. The book traces Tyrwhitt’s subsequent contribution to the development of this set of ideas in diverse geographical, cultural and institutional settings and through personal relationships. In doing so, the book also sheds light on Tyrwhitt’s role in the revival of transnational networks of scholars and practitioners concerned with a humanistic, ecological approach to urban and regional planning and design following World War Two, notably those connecting East and West. The book details Tyrwhitt’s role in creating new programs for planning education in England, North America and Asia; pioneering methods for registered, overlay mapping (a forerunner of GIS), shaping post-war CIAM discourse on humanistic urbanism and assisting CIAM president Jose Luis Sert establish a new professional field of urban design based on this discourse at Harvard University (1956-69); consulting to the United Nations; collaborating with Sigfried Giedion on all of his major publications in English from 1947 on; and helping Constantinos Doxiadis promote a holistic approach to the study of human settlements, which he termed Ekistics, as a founding editor of the journal Ekistics and in the ten Delos Symposia Doxiadis hosted (1963-1972). The book concludes with an a

The full and fascinating story of the Englishwoman who, at one time or another, connects with almost every strand of twentieth-century global urbanism. Michael Hebbert, Manchester University, UK Jacqueline Tyrwhitt’s previously underappreciated influence on city and regional planning in the US and UK, as well as her role in the global exchange of ideas about urban design, has finally achieved appropriate recognition. In this fascinating biography, Ellen Shoshkes chronicles the life and ideas of this remarkable woman and places her in the context of the social and political transformations of her times. Susan S. Fainstein, Harvard University, USA 'One of the great strengths of the book is that the author painstakingly recreates the web of personal contacts, acquaintanceships, and chance encounters through which Tyrwhitt’s life and involvement in the history of twentieth-century planning unfolded'. Planning Perspectives 'In writing this book, Ellen Shoshkes has not only provided a fascinating picture of the lifework of an unsung hero of urban planning and, by extension, practical utopian thought; she has also cataloged in detail some of the reasons why it is so vitally important to proactively make better places and many of the often neglected tools that make this possible. In this respect this biography should be of interest to historians and practitioners alike'. Utopian Studies

Jaqueline Tyrwhitt: A Transnational Life in Urban Planning and Design