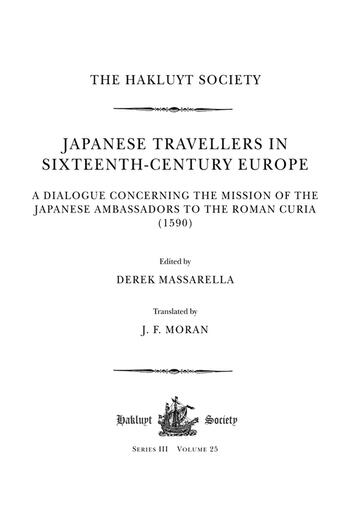 Japanese Travellers in Sixteenth-Century Europe: A Dialogue Concerning the Mission of the Japanese Ambassadors to the Roman Curia (1590)

In 1582 Alessandro Valignano, the Visitor to the Jesuit mission in the East Indies, sent four Japanese boys, two of whom represented important Christian daimyo in western Japan, to Europe. This book is an account of their travels. The boys left Japan on 20 February 1582 and disembarked in Lisbon on 11 August 1584. They then travelled through Portugal, Spain and Italy as far as Rome, the highpoint of their journey, before returning to Lisbon to begin the long voyage home on 13 April 1586. They reached Nagasaki on 21 July 1590, amidst great rejoicing, more than eight years after their departure. During their travels in Europe they had audiences and less formal meetings with Philip II, king of Spain and Portugal, and with popes Gregory XIII and Sixtus V, and were received by many of the most important political, ecclesiastical and social figures in the places they visited. Until the arrival of the embassy in Europe, the Euro-Japanese encounter had been almost exclusively one way: Europeans going to Japan. The embassy was an integral part of Valignano's strategy for advancing the Jesuit mission in Japan. The boys chosen were intended to personify Jesuit success in Japan, raise awareness of Japan in Europe amongst the clerical and secular elites, and demonstrate conclusively that what the Jesuits had been writing about Japan since their arrival there in 1549 was not a fabrication. The embassy was further intended to impress upon the boys the glory, unity, stability and splendour of Christian Europe, so that they might report favourably about their experiences on their return, and counter what Valignano believed were the negative impressions of Europe left by Portuguese merchants and seamen in Japan. As part of this plan, a book consisting of thirty-four colloquia detailing the boys' travels was compiled and translated into Latin under Valignano's supervision. It was published in Macao in 1590 with the title De Missione Legatorvm Iaponensium ad Romanum curiam. Valignano anticipated that it would become a standard text in Jesuit seminaries in Japan. The present edition is the first complete version of this rich, complex and impressive work to appear in English, and is accompanied with maps and illustrations of the mission, and an introduction discussing its context and the subsequent reception of the book.

Contents: Preface; A note on currency; Romanization of Japanese and Chinese names; Introduction: Background to De Missione; Objectives of the Embassy and the individuals chosen; Publication of De Missione; Authorship of De Missione; Sources of De Missione; Contextualizing De Missione; Evaluating De Missione and the Tensho embassy; The boys after their return to Japan; Conclusion. Text: A Dialogue Concerning the Mission of the Japanese Ambassadors to the Roman Curia: Imprimatur; Nihil obstat; Alessandro Valignan of the Society of Jesus to the pupils of the Japanese seminaries; Duarte de Sande to Claudio Aquaviva, Superior General of the Society of Jesus; Contents of these Colloquia; Colloquium I-XXXIV; Bibliography; Index.

Derek Massarella is Professor of History in the Faculty of Economics, Chuo University, Tokyo, where he has taught since 1981. His research interests include early modern European-Asian relations, the history of globalization, and seventeenth-century English history. He is the author of A World Elsewhere: Europe’s Encounter with Japan in the Sixteenth and Seventeenth Centuries (1990), co-editor of The Furthest Goal: Engelbert Kaempfer’s Encounter with Tokugawa Japan (1995), and has contributed to a number of other books and scholarly publications. He is a Fellow of the Royal Historical Society and the International Representative, Japan, for the Hakluyt Society. The late Joseph Moran taught at a number of universities in Britain and Japan. He was Professor of Japanese Studies at the University of Stirling from 1991 until his retirement in 1996. In addition to the history of the Jesuit mission in Japan, his research interests included the history of the Japanese language. He was the author of The Japanese and the Jesuits: Alessandro Valignano in Sixteenth Century Japan (1993), and a number of scholarly articles on the Japanese language and Jesuit history.

’...De Missione is still an important document on the Jesuit mission in Japan and on the first Japanese visitors to several European courts, as an English translation, Japanese Travellers finally makes that document accessible to a much wider audience. Moreover, the introduction and annotations tap a broad range of sources on the histories of Europe and Asia in the sixteenth century, as well as primary sources on the Jesuit mission in Japan and the boys’ travels, making the book a treasure trove of information and a very welcome addition to scholarship of the period.’ Monumenta Nipponica 'This vibrant addition to the works of the Hakluyt Society is of considerable note and finds a prominent place within the renewed scholarly interest in Japan’s "Christian Century."' Journal of Jesuit Studies

Japanese Travellers in Sixteenth-Century Europe: A Dialogue Concerning the Mission of the Japanese Ambassadors to the Roman Curia (1590)