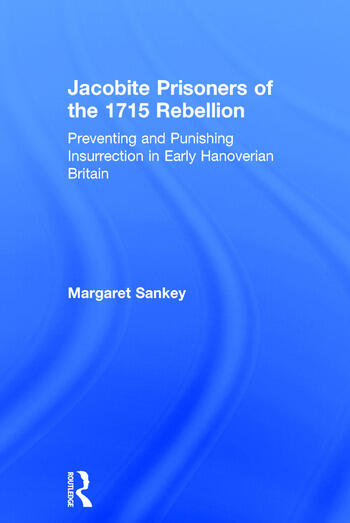 Jacobite Prisoners of the 1715 Rebellion: Preventing and Punishing Insurrection in Early Hanoverian Britain

The Jacobite rebellion of 1715 was a dramatic but ultimately unsuccessful challenge to the new Hanoverian regime in Great Britain. It did, however, reveal serious fault lines in the political foundations of the new regime which enormously restricted the government's freedom of action in the suppression of the rebellion, and effectively made the treatment of the rebels in its aftermath the true test of the new dynasty's legitimacy and stability. Whilst the rulers of England had traditionally dealt harshly with internal rebellion, monarchs and their ministers had to find a delicate balance between showing the power of the regime through the candid exercise of force while maintaining their own reputation for justice and clemency. As such George I and his government had to tailor their reaction to the 1715 rebellion in such a way that it effectively discouraged further participation in Jacobite insurgency, undercut the rebels' ability to challenge the state, and made clear the regime's intention to use a firm hand in preventing rebellion. At the same time it could not cross the line into tyranny with excessive or sadistic executions and had to avoid giving offence to powerful magnates and foreign powers likely to petition for the lives of the captured rebels. To accomplish this feat, the Hanoverian Whig regime used a programme far more subtle and calculated than has generally been appreciated. The scheme it put into effect had three components, to put fear into the rank-and-file of the rebels through a limited programme of execution and transportation, to cripple the Catholic community through imprisonment and property confiscation, and, most crucially, to entertain petitions from members of the elite on behalf of imprisoned rebels. By following such a strategy of retribution tempered with clemency, this book argues that the Hanoverian regime was able to quell the immediate dangers posed by the rebellion, and bring its leaders back into the orbit of the government, beginning the process of reintegrating them back into political mainstream.

'Sankey's book will prove useful to postgraduates and academics, particularly if they possess a background in the period. The book explains the general quiescence of Scottish Jacobites for a generation (being honour bound for good behavior to their Whig patrons who had saved their lives and estates), despite their retention of economic and social aspects lost by their northern English comrades.' The Journal of Military History ’...in eight balanced, soundly researched chapters which collectively fill a critical historiographical gap since [...] the rebellion's aftermath has never been analyzed in detail.' 18th Century Scottish Studies ’... Margaret Sankey's Jacobite Prisoners of the 1715 Rebellion is a vital study that takes an important historiographical position. Sankey offers an informed narrative and analysis of the various Jacobite ranks that submitted to Hanoverian forces and the mercy of George I and of the mechanisms and pressures that dictated their subsequent treatment.’ Journal of British Studies ’This book is an important contribution to the reassessment of the first Hanoverian reign and administration.’ English Historical Review ’Sankey’s Jacobite Prisoners offers a comprehensive and analytically penetrating account of government policy towards those captured as having borne arms or materially assisted the rebels in 1715-16.’ Royal Stuart Review

Jacobite Prisoners of the 1715 Rebellion: Preventing and Punishing Insurrection in Early Hanoverian Britain