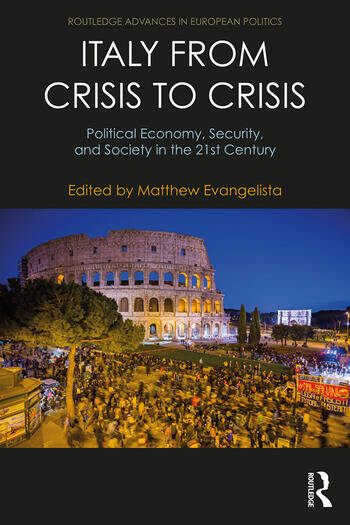 Italy from Crisis to Crisis: Political Economy, Security, and Society in the 21st Century

Italy from Crisis to Crisis seeks to understand Italy’s approach to crises by studying the country in regional, international, and comparative context. Without assuming that the country is abnormal or unusually crisis-prone, the authors treat Italy as an example from which other countries might learn.

The book integrates the analysis of domestic politics and foreign policy, including Italy’s approach to military interventions, energy security, economic relations with the European Union (EU), and to the NATO alliance, and covers a number of issues that normally receive little attention in studies of "high politics," such as information policy, national identity, immigration, youth unemployment, and family relations. Finally, it puts Italy in a comparative perspective – with other European states, naturally – but also with Latin America, and even the United States, all countries that have experienced similar crises to Italy’s and similar – often populist – responses.

2. The Canary in the Coal Mine: Movements, Parties, and Populists in the Italian Crises [Sidney Tarrow]

4. The Trickle Down of Corruption: Italy, Mafia, and the Crisis of Legality [Fabio Armao]

7. Between Shocks and Crises: Changes in Italian Energy Policies from the Cold War to Today [Elisabetta Bini]

8. Where Have All the Young People Gone? Generations, Family, and Work in Italy [Adele Lebano]

9. An Italian "Integration Crisis": The Role of the State and Political Actors in Excluding Immigrants and Ethnic Minorities [Teresa M. Cappiali]

Matthew Evangelista is President White Professor of History and Political Science and former Chair of the Department of Government at Cornell University, New York, USA.

Italy from Crisis to Crisis: Political Economy, Security, and Society in the 21st Century