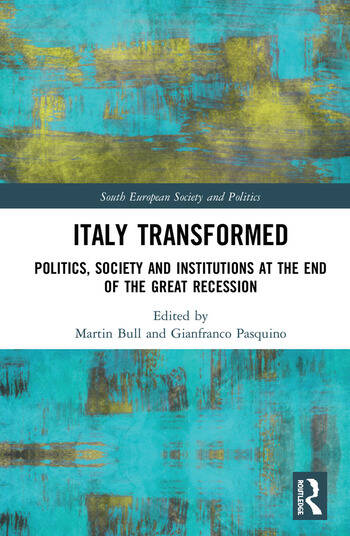 Italy Transformed: Politics, Society and Institutions at the End of the Great Recession

The decade commencing with the great crash of 2008 was a watershed period for Italian politics, involving fundamental and dramatic changes, many of which had not been anticipated and which are charted in this book. This comprehensive volume covers the impact of the Eurozone crisis on the Italian economy and its relationship with the European Union, the dramatic changes in the political parties (and particularly the rise of a new political force, the Five Star Movement, which became the largest political party in 2013), the changing role of the Trade Unions in the lives of Italian citizens, the Italian migration crisis, electoral reforms and their impact on the Italian party system (where trends towards bipolarisation appear to be exhausted), the rise of new forms of social protest, changes to political culture and social capital and, finally, amidst the crisis, reforms to the welfare state.

Overall, the authors reveal a country, which many had assumed was in quiet transition towards a more stable democracy, that suffers an immense shock from the Eurozone crisis and bringing to the fore deep-rooted structural problems which have changed the dynamics of its politics, as confirmed in the outcome to the 2018 National Elections.

This book was originally published as a special issue of South European Society and Politics.

1. Introduction: Italian Politics in an Era of Recession: The End of Bipolarism? Martin J. Bull and Gianfranco Pasquino

2. In the Eye of the Storm: The Italian Economy and the Eurozone Crisis Martin J. Bull

3. The Italian Welfare State in the Crisis: Learning to Adjust? Stefano Sacchi

4. After and Beyond Amoral Familism: The Impact of the Economic Crisis on Social Capital Italian-style Raimondo Catanzaro

5. Trade Unions and Employment Relations in Italy during the Economic Crisis Ida Regalia and Marino Regini

6. Electoral Reform as an Engine of Party System Change in Italy Marta Regalia

7. Protest in Italy in Times of Crisis: A Cross-Government Comparison Massimiliano Andretta

9. The Disappearance of Political Cultures in Italy Gianfranco Pasquino

10. Voters without a Party: The ‘Long Decade’ of the Italian Centre-Right and its Uncertain Future Marco Tarchi

11. The Italian Five Star Movement during the Crisis: Towards Normalisation? Filippo Tronconi

12. The Italian Democratic Party from Merger to Personalism Sofia Ventura

Martin Bull is Professor of Politics at the University of Salford, Greater Manchester, UK and Director of the European Consortium of Political Research, Colchester, UK.

is Professor Emeritus of Political Science at the University of Bologna, Italy.

Italy Transformed: Politics, Society and Institutions at the End of the Great Recession