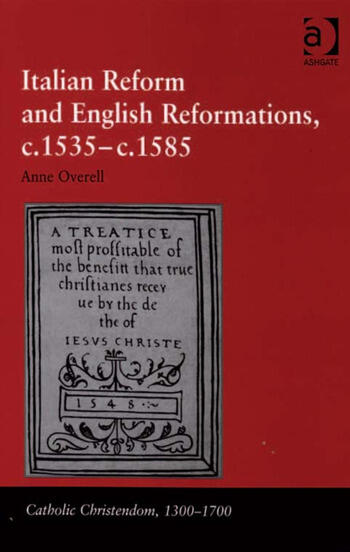 This is the first full-scale study of interactions between Italy's religious reform and English reformations, which were notoriously liable to pick up other people's ideas. The book is of fundamental importance for those whose work includes revisionist themes of ambiguity, opportunism and interdependence in sixteenth century religious change. Anne Overell adopts an inclusive approach, retaining within the group of Italian reformers those spirituali who left the church and those who remained within it, and exploring commitment to reform, whether 'humanist', 'protestant' or 'catholic'. In 1547, when the internationalist Archbishop Thomas Cranmer invited foreigners to foster a bolder reformation, the Italians Peter Martyr Vermigli and Bernardino Ochino were the first to arrive in England. The generosity with which they were received caused comment all over Europe: handsome travel expenses, prestigious jobs, congregations which included the great and the good. This was an entry con brio, but the book also casts new light on our understanding of Marian reformation, led by Cardinal Reginald Pole, English by birth but once prominent among Italy's spirituali. When Pole arrived to take his native country back to papal allegiance, he brought with him like-minded men and Italian reform continued to be woven into English history. As the tables turned again at the accession of Elizabeth I, there was further clamour to 'bring back Italians'. Yet Elizabethans had grown cautious and the book's later chapters analyse the reasons why, offering scholars a new perspective on tensions between national and international reformations. Exploring a nexus of contacts in England and in Italy, Anne Overell presents an intriguing connection, sealed by the sufferings of exile and always tempered by political constraints. Here, for the first time, Italian reform is shown as an enduring part of the Elect Nation's literature and myth.

'We are deeply in Anne Overell's debt. She excavates a Reformation which never happened, the Reformation of Italy, and shows how important it became to both Reformation and Counter-Reformation in Tudor England. This is a triumph of detective work, which should encourage Tudor historians never to neglect the view across the Channel.' Diarmaid MacCulloch, St Cross College, Oxford, UK 'Achieving clarity, cogency and drama along all of these details is impressive in itself, but the surprising insights offered here will be of most critical interest.' Renaissance Quarterly 'Overell conducts her narrative expertly, tracing the interactions of numerous figures over several decades without confusion or repetitiousness. The book is readable and vivid... The style is racy at times but never out of control...' Catholic Historical Review 'This fine book features interesting themes, it skilfully handles primary materials, and its chapters are pithy and absorbing. The study complements both historical orthodoxy and the current paradigms of English Reformation revisionist study. ... [it] will be well received by Reformation scholars.' Sixteenth Century Journal '... Overell is to be congratulated on this excellent study. The author displays a penetrating and incisive understanding of the primary sources and at the same time synthesises a wide range of the latest scholarship.' Journal of Ecclesiastical History 'M. Anne Overell's delightfully written Italian Reform and English Reformations, c.1535-c.1585 covers the period during which Italian reformist ideas reach England...' Studies in English Literature 'Overell offers a thoughtful, lucid exercise in detection, one sensitive to current historiographical trends.' History 'Overell's book is an important contribution to the history of the Reformation in England. It is readable and well researched.' Church History and Religious Culture