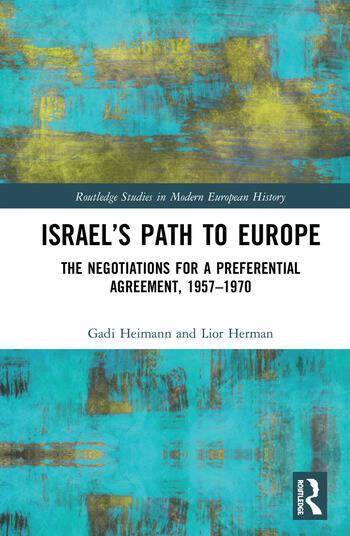 Israel’s Path to Europe: The Negotiations for a Preferential Agreement, 1957–1970

Relations between the new state of Israel and the European Union in the first twenty years of the Community’s existence were a major policy issue given the background of the Holocaust and the way the new nation was established. This book focuses on Israel-European Community relations from 1957 to 1975 - from the signing of the Treaty of Rome (1957), which officially established the Common Market, to the conclusion of Israel’s Free Trade Agreement with the Community. It reveals a new and key facet of Israeli diplomacy during the country's infancy, joining the many studies concerning Israel's relations with the United States, France, Germany and Britain.

Chapter 1: The Path to Economic Integration

Chapter 3: Pursuing a Range of Options

Chapter 4: A Covert Understanding between the Council and Israel

Chapter 5: The End of the Dream of Association

Chapter 6: The Decision to Begin Negotiations on a Trade Agreement

Gadi Heimann is Professor in the Department of International Relations at the Hebrew University of Jerusalem. He is the author of Franco-Israeli Relations, 1958-1967 (Routledge 2017).

is Assistant Professor in the Department of International Relations at the Hebrew University of Jerusalem.

Israel’s Path to Europe: The Negotiations for a Preferential Agreement, 1957–1970