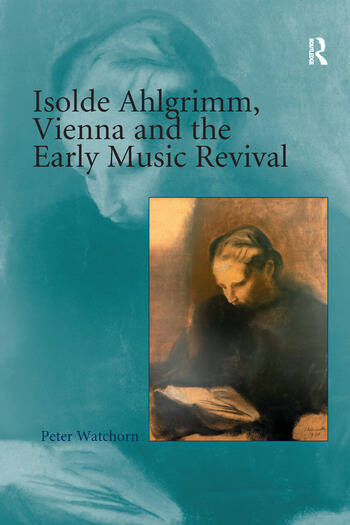 Isolde Ahlgrimm (1914-1995) was an important pioneer in the revival of Baroque and Classical keyboard instruments in her native city, Vienna, and later, throughout Europe and the United States. She trained as a pianist at the Musikakademie in Vienna under the instruction of Viktor Ebenstein, Emil von Sauer and Franz Schmidt. In 1934 she met the musical instrument collector, Dr Erich Fiala, whom she married in 1938. His activities opened up the world of early instruments to her. Using a 1790 fortepiano by Michael Rosenberger, Isolde Ahlgrimm began her career as a specialist on early keyboard instruments with the first in her notable series of Concerte fÃ¼r Kenner und Liebhaber, given in Vienna's Palais Palffy in February 1937. Ahlgrimm's career as a harpsichordist also began in 1937, when a new instrument was commissioned from the Ammer brothers in Eisenberg, Germany. In 1943 Ahlgrimm performed her first all-harpsichord programme, which consisted of the Goldberg Variations by J.S. Bach. From 1949 to 1956, she devoted herself to performing and recording nearly all of Bach's harpsichord music for the newly-founded Dutch label, Philips, presenting her new approach to the harpsichord to a wider audience. Ahlgrimm's performances of Baroque music represented a radical departure from the distinctly twentieth-century interpretations by the much more famous Wanda Landowska and her followers. Most obviously, Ahlgrimm's harpsichord performances eliminated frequent registration changes (her instrument had hand stops rather than pedals to change registers), and largely eschewed the massive ritardandi and other anachronistic performance practices that were hallmarks of Landowska's essentially Romantic style. Ahlgrimm researched and emphasized rhetorical traditions on which the music was based. This became more pronounced throughout the course of her later performing, writing and teaching career, and it was the beginning of an approach to the performance of eighteenth-century music which was later further developed by Gustav Leonhardt, Nikolaus Harnoncourt and their students. Peter Watchorn provides an engaging study of this pioneer, and argues that Isolde Ahlgrimm's contribution to the harpsichord and fortepiano revival was pivotal, and that her use of period instruments and the inspiration she instilled in younger musicians, including Nikolaus Harnoncourt and Gustav Leonhardt, has been almost entirely overlooked by the wider musical world.

Peter Watchorn was born in Australia. Since 1974 he has devoted himself to a detailed study of the harpsichord and its repertoire, achieving an international reputation for his consistently high standard of performance. Resident since 1987 in Cambridge, Massachusetts, Peter Watchorn has enjoyed an extensive career in both solo and chamber music. In 1985 at the Boston Early Music Festival he was presented with the most prestigious American prize for early music, the Erwin Bodky Award, for his performances of the music of J.S. Bach. From 1985-1992 he studied with the celebrated Viennese harpsichordist, Isolde Ahlgrimm and, as her authorized biographer, has published numerous articles about her life and career. He holds a Doctorate of Musical Arts from Boston University (1995). His recordings are found on HÃ¤nssler, Titanic, Globe and Musica Omnia.

'Isolde Ahlgrimm appears in the pages of Peter Watchorn's biography as an artist of great depth, insight, and integrity, and a person of extraordinary strength and determination. Her pioneering contributions to the field of early music, which have largely gone unrecognized, were vital to our present-day awareness and appreciation of the musical aesthetics of former times. As a superb musician who knew the importance of scholarly research and saw period instruments as primary tools for understanding music of the past, she influenced many of the best known early music performers of the next generation...The story of Ahlgrimm's musical life offers more than a glimpse of the flowering of early music in Vienna before World War II and her place at its centre...The reader will come away from reading about her life with an altered view of the history of the early music movement'. Penelope Crawford, from the Foreword ’The specialist will find a wealth of material in the body of the book and much more in the appendices. As well as the discography and list of performers at the Concerte there is a wide range of material: correct fingering, when and how to play ornaments, etc. Much of this is extremely valuable to the performer... There is also an excellent bibliography, including details of several of Ahlgrimm's own writings.’ MusicWeb International