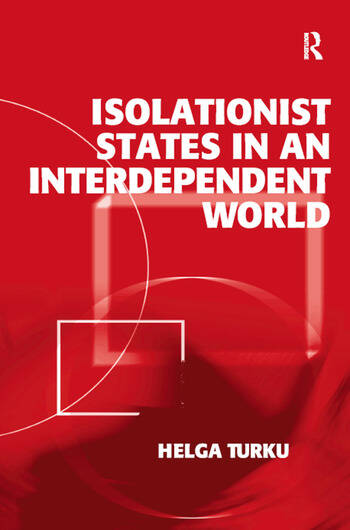 Isolationist States in an Interdependent World

States that withdraw from the international system provide insight into an unexplored area of international relations in terms of rationality, self-interest, power politics, cooperation and alliances. Indeed, isolationism in an interdependent state system goes against the logic of modern society and state systems. Using historical, comparative and inductive analysis, Helga Turku explains why states may choose to isolate themselves both domestically and internationally, using comparative historical analysis to flesh out isolationism as a concept and in practice. The book examines extreme forms of self-imposed domestic and international isolation in an interdependent international system, noting the effects on both the immediate interests of a ruling regime and the long-term national interests of the state and the populace.

'An intriguing study of why a handful of states pursue extreme isolationist policies despite the sweep of globalization. Using Burma, North Korea and Albania as case studies, the author effectively examines both the rationales for such isolationism as well as its ultimate cost to the societies concerned. An impressive blend of both history and theory.' Stephen Garrett, Monterey Institute of International Studies, USA 'By examining the cases of Albania, Burma and North Korea, this book presents strong and very interesting evidence that countries that adopt the strategy to isolate themselves or become autarkic run the risk of reducing their prospects for economic growth and development and in the long run, the state's ability to exercise power in the international system.' Carlos Seiglie, Rutgers University-Newark, USA '... this book will be of interest to students of world politics and history, who investigate how national interests vary according to different contexts in an interdependent global world.' Europe-Asia Studies

Isolationist States in an Interdependent World