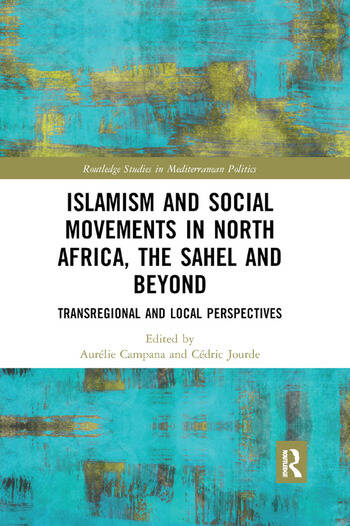 Islamism and Social Movements in North Africa, the Sahel and Beyond: Transregional and Local Perspectives

As North African, Middle Eastern, and Sahelian societies adapt to the post-Arab Spring era and the rise of violence across the area, various groups find in Islam an answer to the challenges of the era. This book explores how Islamist social movements, Sufi brotherhoods, and Jihadi armed groups, in their great diversity, elaborate their social networks, and recruit sympathizers and militants in complicated times. The book innovates by transcending regional boundaries, bringing together specialists of the three aforementioned regions. First, it highlights how geographically dispersed religious groups define themselves as members of a larger, universal Umma, while evolving in deeply embedded local contexts. Second, its contributors prioritize in-depth fieldwork research, offering fine-grained, original insights into the manifold mobilization of Islamist-inspired social movements in Egypt, Libya, Tunisia, Mali, Senegal, Mauritania, Burkina Faso, and Western Europe. The book sheds light on the tense debates and competition taking place amongst the different trends composing the Islamist galaxy and between other groups that also claim an Islamic legitimacy, including Sufi brotherhoods and ethnic and/or tribal groups as well.

This book was originally published as a special issue of Mediterranean Politics.

Introduction - Islamism and social movements in North Africa, the Sahel and Beyond: transregional and local perspectives Aurélie Campana and Cédric Jourde The Constrained Institutionalization of Diverging Islamist Strategies: The Jihadis, the Muslim Brotherhood, and the Salafis between two Aborted Egyptian Revolutions Jerome Drevon The Egyptian Muslim Sisterhood between Violence, Activism and Leadership Erika Biagini Disillusioned militancy: the crisis of militancy and variables of disengagement of the European Muslim Brotherhood Samir Amghar and Fall Khadiyatoulah Between social contention and takfirism: the evolution of the Salafi-jihadi movement in Tunisia Fabio Merone Contention, Violence and Stalemate in Post-War Libya George Frederick Willcoxon Alliances of convenience: assessing the dynamics of the Malian insurgency Adib Bencherif and Aurélie Campana Betrayal, Heresy, Exile and Mystical Attacks: The Cost of Changing Islamic Affiliation in an Ethnicized Society (Mauritania and Senegal) Cédric Jourde Senegal’s Arabic literates: from transnational education to national linguistic and political activism Marie Brossier

Aurélie Campana is Full Professor at Université Laval, Canada. Her research focuses on the diffusion of violence across movements and borders in the North Caucasus and the Sahel.

Cédric Jourde is Associate Professor at the University of Ottawa, Canada. He specializes on the politics of ethnicity and Islam in the Sahel.

Islamism and Social Movements in North Africa, the Sahel and Beyond: Transregional and Local Perspectives