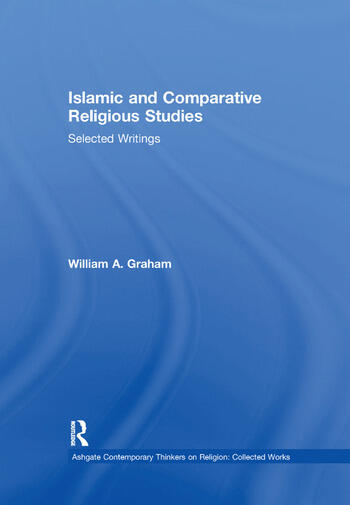 William A Graham, a leading international scholar in the field of Islamic Studies, gathers together his selected writings under three sections: 1.History and Interpretation of Islamic Religion; 2.The Qur'an as Scripture, and 3. Scripture in the History of Religion. Each section opens with a new introduction by Graham, and a bibliography of his works is included. Graham's work in Islamic studies focuses largely on the analysis and interpretation of the religious dimensions of ritual action, scriptural piety, textual authority/revelation, tradition, and major concepts, such as grace and transcendence. His work in the comparative history of religion has focused in particular on the 'problem' of scripture as a cross-cultural religious phenomenon that is more complex than simply 'sacred text'. This invaluable resource will be of primary interest to students of the Islamic tradition, especially as regards Qur'anic piety, Muslim 'ritual' practice, and fundamental structures of Islamic thought, and to students of the comparative history of religion, especially as regards the phenomenon of 'scripture' and its analogs.

Contents: Preface; Introduction; Part I History and Interpretation of Islamic Religion: Introduction; Traditionalism in Islam: an essay in interpretation; Concepts of revelation in early Islam; The Divine Saying as problem; Transcendence in Islam; Islam in the mirror of ritual. Part II The Qur'an as Scripture: Introduction; 'The winds to herald his mercy': nature as token of God's sovereignty and grace in the Qur'an; The earliest meaning of 'Qur'an'; Qur'an as spoken word: an Islamic contribution to the understanding of scripture; 'Those who study and teach the Qur'an'; Scripture and the Qur'an. Part III Scripture in the History of Religion: Introduction; Scripture; Scripture as spoken word; The Indian paradigm for scriptural orality; God's Word in the desert: Pachomian scriptural practice; Reflections on comparative study in religion: 'scripture' as a case in point; Bibliography; Index.

W. A. Graham has been a member of the Harvard Faculty of Arts and Sciences since 1973 and was appointed dean of Harvard Divinity School in 2002. He is a past director of the Center for Middle Eastern Studies and past chair of the Department of Near Eastern Languages and Civilizations, the Committee on the Study of Religion, the Committee on Middle Eastern Studies, and the Core Curriculum Subcommittee on Foreign Cultures at Harvard. From 1991-2003 he was Master of Currier House, one of Harvard's twelve residential colleges. He is also former chair of the Council on Graduate Studies in Religion (U.S. and Canada). He is a fellow of the American Academy of Arts and Sciences. His scholarly work has focused on early Islamic religious history and textual traditions and problems in the history of world religion. In October 2000 he received the quinquennial Award for Excellence in Research in Islamic History and Culture from the Research Centre for Islamic History, Art and Culture, the research institute of the Organisation of the Islamic Conference. He has held John Simon Guggenheim and Alexander von Humboldt research fellowships and is the author of Divine Word and Prophetic Word in Early Islam (1977; American Council of Learned Societies History of Religions Prize, 1978), Beyond the Written Word: Oral Aspects of Scripture in the History of Religion (1987, 1993), and numerous articles and reviews; co-author of The Heritage of World Civilizations (8th rev. ed., 2008) and Three Faiths, One God (2003); co-editor of Islamfiche: Readings from Islamic Primary Sources (1982-87). He received his A.B summa cum laude from the University of North Carolina at Chapel Hill and his A.M. and Ph.D. degrees from Harvard.

'William Graham's meticulous and wide-ranging researches constitute a landmark contribution to Islamic studies and a clear demonstration of how to carry out fully grounded comparative studies of religion. This outstanding collection will be welcomed by students and specialists across the field of religious studies.' Carl W. Ernst, University of North Carolina at Chapel Hill, USA 'With first-person original introductions to review his own scholarly career and to contextualize the collected materials, William A. Graham's Islamic and Comparative Religious Studies offers a unique opportunity to get to know this scholar of an uncommon caliber. Students of Islam will learn how to approach it as one major religious tradition of humankind to be productively juxtaposed and compared with others. Students of other religious traditions or religion in general will find here a presentation of important aspects of Islam that is not only accessible but inspirational. This is a must-read for all the students with interest in Islam, "scripture", or comparative studies of religion, especially at an early stage of their scholarly formation.' Kazuo Morimoto, University of Tokyo, Japan 'These insightful and often deeply felt essays illuminate the continuing signicance and salience of the human engagement with Religion and particularly Islam,across time and space.' Azim Nanji, Stanford University, USA William Graham has throughout his career consistently emphasized the relationships between religious communities and their scriptures. This collection of essays shows the consistency and clarity that he has brought to the study of Islam, of scripture, and of religion. Because Graham started with Muslim’s relationship to the Qur’an, he has cast the originally Christian/Western word scripture� into much sharper relief. That has changed how the field of religion must understand the category of scripture and also the individual texts, traditions and practices indicated by the term.