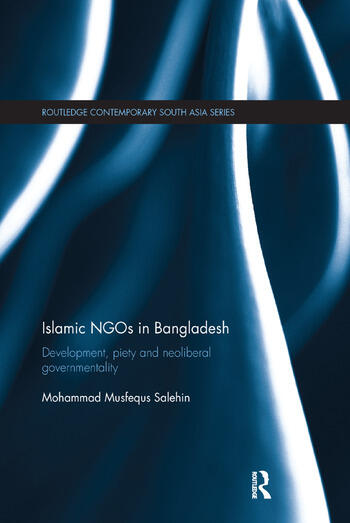 NGOs (Non-Governmental Organizations) have emerged in both a development and aid capacity in Bangladesh, providing wide-reaching public services to the country’s population living in extreme poverty. However, resistance to and limitations of NGO-led development - which in conjunction with Bangladesh’s social transformation - led to a new religious-based NGO development practice.

Looking at the role of Islamic NGOs in Bangladesh, the book investigates new forms of neoliberal governmentality supported by international donors. It discusses how this form of social regulation produces and reproduces subjectivities, particularly Muslim women subjectivity, and has combined religious and economic rationality, further complicating the boundaries and the relationship between Islam, modernity, and development. The book argues that both secular and Islamic NGOs target women in the name of empowerment but more importantly as the most reliable partners to meet their debt obligations of micro-financing schemes, including shari’a-based financing. The targeted women, in turn, experience Islamic NGOs as less coercive and more sensitive to their religious environment in the rural village community than are secular NGOs.

Providing a comparative study of the role of religious and secular NGOs in the implementation of neoliberal policies and development strategies, this book will be a significant addition to research on South Asian Politics, Development Studies, Gender Studies, and Religion.

Mohammad Musfequs Salehin is a Visiting Researcher at the Centre for Women’s and Gender Research (SKOK), University of Bergen, Norway.