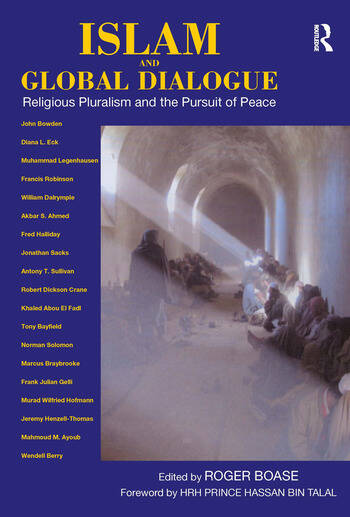 Islam and Global Dialogue: Religious Pluralism and the Pursuit of Peace

At a time when the world is becoming increasingly interdependent, multi-cultural and multi-religious, the concept of religious pluralism is under assault as a result of hatred, prejudice and misunderstanding from both religious exclusivists and dogmatic secularists. In this important and timely book, twenty internationally acclaimed scholars and leading religious thinkers respond to contemporary challenges in different ways. Some discuss the idea of a dialogue of civilisations; others explore the interfaith principles and ethical resources of their own spiritual traditions. All of them reject the notion that any single religion can claim a monopoly of wisdom; all are committed to the ideal of a just and peaceful society in which people of different religions and cultures can happily coexist. More space is here given to Islam than to Judaism and Christianity because, as a result of negative stereotypes, it is the most misunderstood of the major world religions. HRH Prince Hassan bin Talal of Jordan contributes the Foreword.

Roger Boase is an Honorary Research Fellow at Queen Mary College, University of London, and was a Professor at the University of Fez. He has been involved in interfaith discussions for many years. His publications include The Origin and Meaning of Courtly Love (1977), The Troubadour Revival (1978), 'The Muslim Expulsion from Spain', History Today (April 2002), and, with Aisha Ahmad, Pashtun Tales from the Pakistan-Afghan Frontier (2003).

If there were ever a time that a book on religious pluralism and peace ought to be required reading for politicians, public intellectuals, policymakers, and the media, as well as a general audience, that time is now. Conceived as a response to the excoriation of Islam after 9/11, Roger Boase has put together a remarkable book on the need for interreligous dialogue as the only way to lay the foundations for a more peaceful world.� This need reverberates through each chapter, be it written by a Jewish, Christian, or Muslim scholar. This means that, as in a symphony, even though each scholar writes grounded in his/her own faith tradition (instrument), their collective voices chorus the same song. It makes for very powerful reading. Dealing with religious pluralism, a topic that touches the most important facets of life, the book has a depth to it that is profound and moving. Katherine Bullock in The American Journal of Islamic Social Sciences Today, the World's religions are challenged by factions that preach religious exclusivism and theologies of hate. As 9/11 tragically demonstrated, Islam has been hijacked and used by extremists and global terrorists. Islam and Global Dialogue is a major contribution toward the promotion of mutual understanding, religious pluralism, and tolerance and thus in the reassertion of religion's role in promoting global peace rather than conflict.' John L. Esposito, University Professor of Religion and International Affairs and Islamic Studies, Georgetown University, USA 'In a period of bloody confrontations and religious radicalisms that nourish the self-styled clash of civilisations, it is necessary to read these pluralistic reflections on the matter by a brilliant group of Jewish, Christian and Muslim intellectuals and scholars. The book is a meritorious effort to promote dialogue and peace.' Juan Goytisolo, Marrakesh 'This essential book conclusively disposes of the vicious mythology that the religious faiths are doomed to f

Islam and Global Dialogue: Religious Pluralism and the Pursuit of Peace