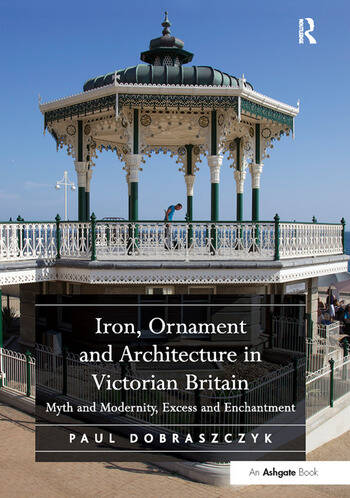 Iron, Ornament and Architecture in Victorian Britain: Myth and Modernity, Excess and Enchantment

Vilified by leading architectural modernists and Victorian critics alike, mass-produced architectural ornament in iron has received little sustained study since the 1960s; yet it proliferated in Britain in the half century after the building of the Crystal Palace in 1851 - a time when some architects, engineers, manufacturers, and theorists believed that the fusion of iron and ornament would reconcile art and technology and create a new, modern architectural language. Comprehensively illustrated and richly researched, Iron, Ornament and Architecture in Victorian Britain presents the most sustained study to date of the development of mechanised architectural ornament in iron in nineteenth-century architecture, its reception and theorisation by architects, critics and engineers, and the contexts in which it flourished, including industrial buildings, retail and seaside architecture, railway stations, buildings for export and exhibition, and street furniture. Appealing to architects, conservationists, historians and students of nineteenth-century visual culture and the built environment, this book offers new ways of understanding the notion of modernity in Victorian architecture by questioning and re-evaluating both Victorian and modernist understandings of the ideological split between historicism and functionalism, and ornament and structure.

'This book was well produced by the publisher, with a wealth of good illustrations. It should mark the beginning of a reassessment of cast iron as the plastic medium of Victorian modernity. Recommended.' Choice

'This book is a welcome addition to the rather small bibliography on Victorian cast iron architecture ... Comprehensively illustrated, extesively researched and with copious footnotes, it presents one of the most sustained studies to date of the development of mechanised architectural ornament in iron in 19th-century architecture ... Dobraszcyzk provides a refreshing evaluation of the contribution made by architects, designers and iron founders to the expanding urban fabric of 19th-century Britain and the world.' Decorative Arts Society Newsletter

Iron, Ornament and Architecture in Victorian Britain: Myth and Modernity, Excess and Enchantment