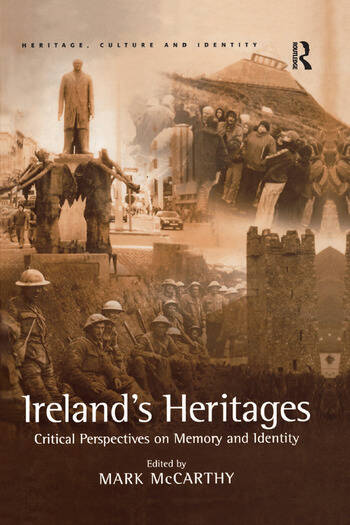 This book is the first sustained attempt to incorporate critical scholarship and thought at the cutting edge of contemporary geography, history and archaeology into the burgeoning field of Irish heritage studies. It seeks to illustrate the validity of multiple depictions of the Irish past, showing how scrutiny of heritage practices and meanings is so essential for illuminating our understanding of the present. Examining Ireland's heritages from a critical perspective that celebrates notions of heterogeneity and uniqueness, the distinguished contributors to this book scrutinise the multiplicity of complex relations between heritage, history, memory, commemoration, economy, and cultural identity within various historical, geographical and archaeological contexts. Using several examples and case studies, this book raises issues not only from a uniquely Irish perspective, but also investigates the memorialisation and marketing of the Irish past in overseas locations such as the USA and Australia.

Dr Mark McCarthy is a Lecturer in Heritage Studies, at the School of Humanities, Galway-Mayo Institute of Technology at Galway, Republic of Ireland.

’Ireland’s Heritages contains a lucid series of case studies examining heritage and memory in 19th, 20th and 21st century Ireland. Bringing together leading authors on Irish geography, history and archaeology, it clearly merits a place in anyone's library - but will be especially welcomed by those interested in the construction of Irish identities both at home� and abroad�.’ Ulf Strohmayer, National University of Ireland, Republic of Ireland ’Under the editorship of Mark McCarthy, a band of distinguished scholars offer up an incisive and revealing cornucopia of critical essays riveted on the theme of (Irish) heritage. It is a timely offering which should be of interest to politicians and policy workers besides disciplines such as geography, history and archaeology.’ Patrick O’Flanagan, University College Cork, Republic of Ireland ’Ireland’s Heritages is a useful reference in its summary of debate on memory and identity, and in its challenging task of bringing these themes into a critical forum.’ Historic Environment ’...this book provides a very comprehensive and varied examination of the multi-faceted nature and understandings of Irish heritages.’ Journal of the Royal Anthropological Institute