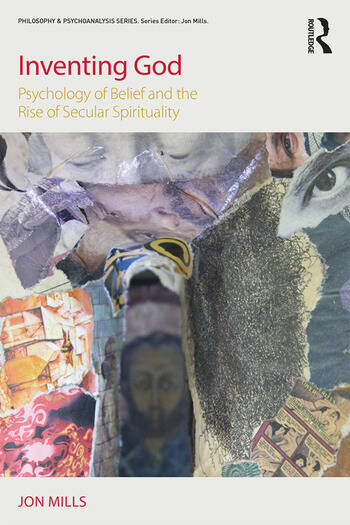 Inventing God: Psychology of Belief and the Rise of Secular Spirituality

In this controversial book, philosopher and psychoanalyst Jon Mills argues that God does not exist; and more provocatively, that God cannot exist as anything but an idea. Put concisely, God is a psychological creation signifying ultimate ideality. Mills argues that the idea or conception of God is the manifestation of humanity’s denial and response to natural deprivation; a self-relation to an internalized idealized object, the idealization of imagined value.

After demonstrating the lack of any empirical evidence and the logical impossibility of God, Mills explains the psychological motivations underlying humanity’s need to invent a supreme being. In a highly nuanced analysis of unconscious processes informing the psychology of belief and institutionalized social ideology, he concludes that belief in God is the failure to accept our impending death and mourn natural absence for the delusion of divine presence. As an alternative to theistic faith, he offers a secular spirituality that emphasizes the quality of lived experience, the primacy of feeling and value inquiry, ethical self-consciousness, aesthetic and ecological sensibility, and authentic relationality toward self, other, and world as the pursuit of a beautiful soul in search of the numinous.

will be of interest to academics, scholars, lay audiences and students of religious studies, the humanities, philosophy, and psychoanalysis, among other disciplines. It will also appeal to psychotherapists, psychoanalysts and mental health professionals focusing on the integration of humanities and psychoanalysis.

1. God as a Metaphysical Question 2. Religion as Naturalized Psychology 3. The Need to Invent God 4. Spirituality without God 5. In Search of the Numinous

Jon Mills, Psy.D., Ph.D., ABPP is a philosopher, psychoanalyst, and clinical psychologist. He is Professor of Psychology & Psychoanalysis at the Adler Graduate Professional School in Toronto and is the author of many books in philosophy, psychoanalysis and psychology. Recipient of many awards for his scholarship, he received the Otto Weininger Memorial Award for lifetime achievement in 2015, given by the Canadian Psychological Association. He runs a mental health corporation in Ontario, Canada.

‘This is a probing, thoughtful, and sensitive discussion of belief in God. Jon Mills integrates philosophy, psychology, and psychoanalysis to provide a comprehensive and penetrating account of the nature of belief. His two main theses strike me as clearly correct: (a) there is no God and (b) the idea of God is a deep seated and natural part of the human psyche.’ - Colin McGinn, philosopher, author of Prehension and numerous books

'Every one of the 100 billion people who came before us has died, without a shred of evidence that they live on in some other life. Facing the reality of our death has spawned world religions and spiritual movements, but in this, the Age of Science, we need a new worldview that gives individuals meaning and unites us as a species. Jon Mills' Inventing God does just this, beautifully and powerfully outlining a humanist perspective that can be embraced by all. This book, however, should not be read just by atheists and humanists, but by anyone desirous of deeper meaning, which is all of us.'—Michael Shermer, Publisher of Skeptic magazine; monthly columnist for Scientific American; author of The Moral Arc.

'Atheism has been waiting for its philosophical psychologist. Dr. Jon Mills fulfills that role expertly, with his clinical discernment and humanist temperament. God can be a persuasive idea due to human frailties and fantasies, but Dr. Mills explains how anyone can control and dismiss that idea’s power over their minds. His readers are in the finest caring hands as they learn how authentic and fulfilling a secular life philosophy can be.' - Dr. John R. Shook, author of The God Debates

‘With this book, Jon Mills brings a considerable clarification to the "atheism" debate by insisting, like the classic sociologist Emile Durkheim before him, on the difference between God questions and religion questions. Leaving aside the sociological and political questions of religion and investigating, instead, the God questions, Mills enriches the debate with a hitherto rarely considered viewpoint: by not so much focussing upon what people, when speaking of God, reveal about God, but rather upon what they reveal about themselves--their aspirations, wishes, needs, fears, etc. Written in a clear and elegant style that never shows any contempt for its object, but as well never falls into compromises with it, this book opens up a great chance for civilizing the (sometimes aggressive) discussions between believers and non-believers, not by making them share the same opinions, but by allowing them to get more insight into each other's - thoroughly human - motives.’ - Prof. Robert Pfaller, author of On the Pleasure Principle in Culture

‘Most writers on religion focus on either philosophy--Does God exist?--or social science--Why do persons believe in God? For example, the New Atheists, who are discussed here, limit themselves to the first question and ignore the second. Conversely, social scientists, including psychologists, typically focus on the second question and ignore the first. To his credit, Jon Mills covers both questions and connects them. He does not reduce religion to wish-fulfilment a la The Future of an Illusion. He roots religion in a far deeper kind of wish. He does not argue that religion is therefore delusory but rather that the truth claims of religion, for which he prefers the term spirituality, must start with this wish. An amazingly wide-ranging and provocative work.’ - Prof. Robert A. Segal, Sixth Century Chair in Religious Studies, University of Aberdeen

Inventing God: Psychology of Belief and the Rise of Secular Spirituality